The Vivo Nex series of Vivo phones has been the focus of a few leaks on the web for quite some time now. Vivo has already scheduled a launch event for June 12 where it will detail the specs of the upcoming device, and while we inch closer to the official launch date,  it seems like the leaks won’t stop coming.

Recently, we got to know that vivo will release three variant of the device – the base Vivo NEX, Vivo NEX S and Vivo NEX A. That was preceded by a separate report that suggests two variants of the Vivo Nex will pack Snapdragon 710 chipsets, while the other variant will use the flagship Snapdragon 845 SoC.

Today, a Geekbench listing has revealed which of the variant that will be the most sophisticated. The Vivo NEX S has appeared on the Geekbecnh database packing the Octa-core SD 845 Soc. By implication, both NEX A and NEX will be powered by Snapdragon 710 chipset. The NEX S boasts 8GB of RAM according to the benchmark and returned impressive single core test and Multi-core test scores of 2419 and 9085 respectively. 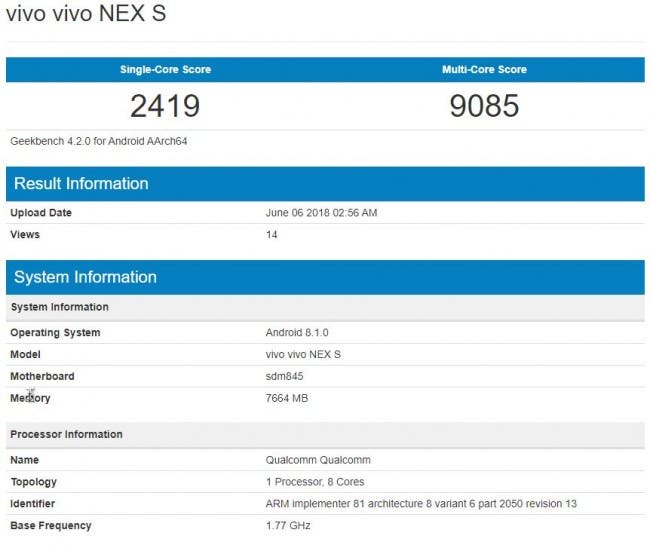