The race for the smartest of Home speakers are being ferocious, in one side we have Amazon and its line of Echo speakers powered by Alexa, and on the other, we have Google Home fueled by Google Assistant. Previous reports have been indicating that another tech giant – Samsung – is about to join to this fierce fight with a Bixby-brained smart speaker. Thanks to a freshly leaked patent we can have a clue of what the South-Korean giant is preparing for consumers.

The leaked patent was filed back in November of 2017 in the US and reveals a circular speaker that is capable of rotating 360 degrees. Furthermore, the speaker carriers 7 microphones in total, a camera, and a touch-sensitive display. The product is made of two parts, the bottom one acts as a stand for the speaker, while the upper is equipped with the microphone layout and can rotate up to 360 degrees.

According to the patent, whenever a user speaks the Bixby speaker will rotate and adjust the position automatically, thus, recognizing the user commands closely, accurately and quickly. The camera will act just after the speaker recognizes the source of the voice, and matches it as one of the profiles stored in the speaker, then after the position is adjusted, the snapper will detect the face of the user and answer accordingly. 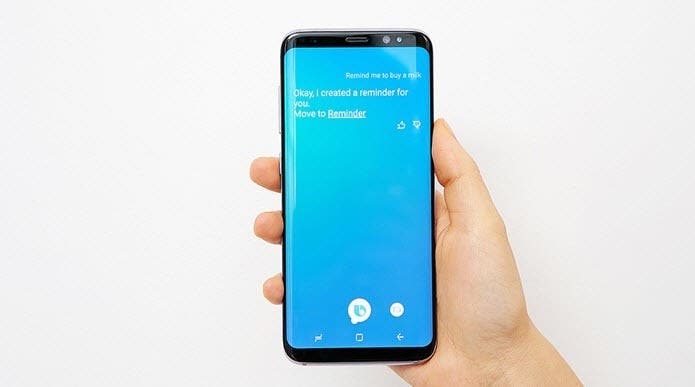 Alongside the camera and microphone behaviors, the top part of the speaker also contains a touchscreen that can be utilized to display text, photos, videos and for recognizing different gestures. Last, but not least, this touch display is said to support the hover input via an S-Pen, just like the Samsung Galaxy Note Smartphones, this may indicate mean that Samsung intends to release the speaker alongside Galaxy Note 9. However, only time will tell.

For now, the possible schedules for this Bixby Speaker release are the August 9 event that will reveal Galaxy Note 9 and Gear S4, or the IFA 2018 that will happen in September. We’ll keep an eye in more news regarding this new smart device.