We’ve just seen the latest round of Mi Max 3 leaks in two days with an alleged 3C certification as well as what appears to be a front panel of the handset. Now, here are the purported schematics of the big budget phablet. The leak does come from Weibo, so we suggest readers to not cling to them and also not jump to conclusions.

We’ve earlier heard murmurs of an absolute beast of a display. Well, this leaks suggests the same. A huge 6.99-inch display with 1080p resolution, but can this even be called a phablet if it is at all true. Moreover, the Mi Max 3 will boast a Snapdragon 710 CPU even skipping the SD 660 which would be the logical upgrade after the SD625. We know the Snapdragon 710 is held in high regard from Xiaomi which is why we saw it on the Mi 8 SE flagship. This looks a bit iffy. The processor is complemented by 4GB/6GB of RAM. There’s no mention of storage here. 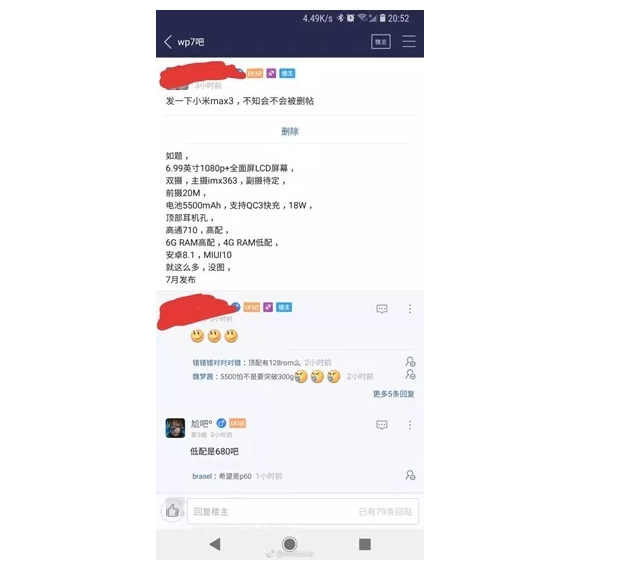 As for the photo snappers, the new exposure suggests a primary 20MP Sony IMX363 sensor. Needless to say, Android 8.1 Oreo with MIUI 10 is the most believable part of this leak. As is the 5,500mAh battery. The Mi Max already had a huge above 5,000mAh battery, so this can be expected.

The handset is certain to launch in July, that much is official. So, we can expect more solid info as we near the end of June.

Next Report: Samsung's 7.3-inch foldable phone to cost a whopping $1850