Recently, Canalys released a data analysis report for the global VR market in the first quarter of 2018. According to it, in the Q1, 2018, the global VR headset market grew by 16% year-on-year, with shipments reaching 650,000 units. Among them, the standalone VR headsets’ shipped volume increased by 234% year-on-year, which injected a strong boost to the depressed VR market. Honestly, this was the main factor in the growth of VR market in the first quarter. At the same time, driven by the shipment of the standalone VR headsets, China’s VR market grew by 200% year-on-year, while other key markets such as the United States and Japan decreased year-on-year. Generally, with the active participation and promotion of Chinese manufacturers, China accounted for more than 80% of global VR shipments. 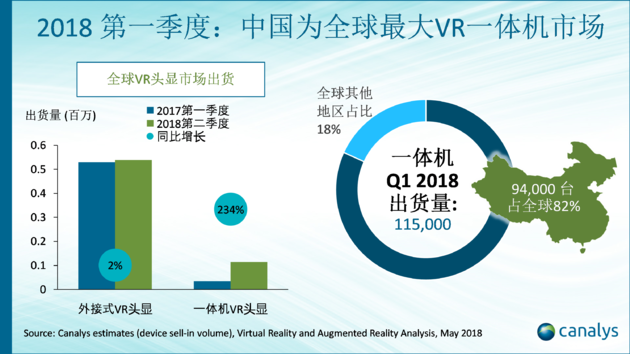 However, in terms of overall VR headsets volume, the US market is still the largest market in the world, accounting for 31% of the global market. The Chinese market shipments gradually approached the US market, accounting for 28%. According to Vincent Thielke, a research analyst at Canalys, ‘The Oculus Go began shipping in May 2018 and the early market reaction has been positive for the US$200 standalone device. With HTC and other vendors eager to launch worldwide, the standalone VR headset market in the US will catch up quickly.’

In China, the standalone VR headsets shipped about 94,000 units in the first quarter, accounting for 51% of the total domestic market. HTC is an absolute leader here with a 33% market share, followed by Pico and DPVR. Thanks to the Vive brand, HTC shipped 31,000 Vive Focus standalone VR headsets. Pico sold 27.000 standalone VR headsets. Canalys Senior Analyst Jason Low claims, ‘Thanks to its lower price, the Pico Goblin headset proved popular among consumers as well as business users with less demanding requirements.’ 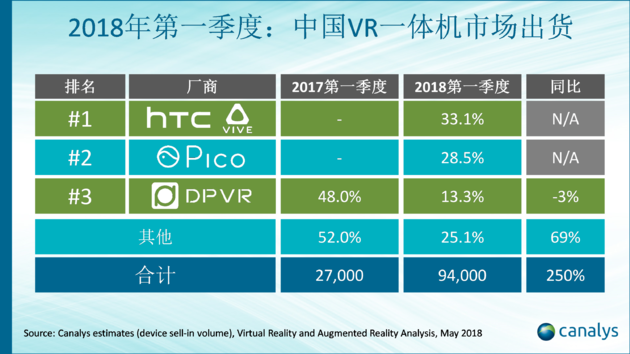 Canalys predicts the standalone headset niche is expected to grow rapidly this year. The new products launched by Oculus and Lenovo, as well as Xiaomi, DPVR, iQiyi, and others, will make the market grow rapidly. And maybe China will outrun the US.