The Oppo Find X is one of the hottest topics of discussion and speculation in the smartphone arena. Posters confirm 93.8% screen-to-body ratio and render showcases a bezel-less, notch-less smartphone with a never seen before design. Another poster has leaked that confirms the previous speculations. An accompanying image hints at a slide-out front camera module, but it seems a little sketchy. 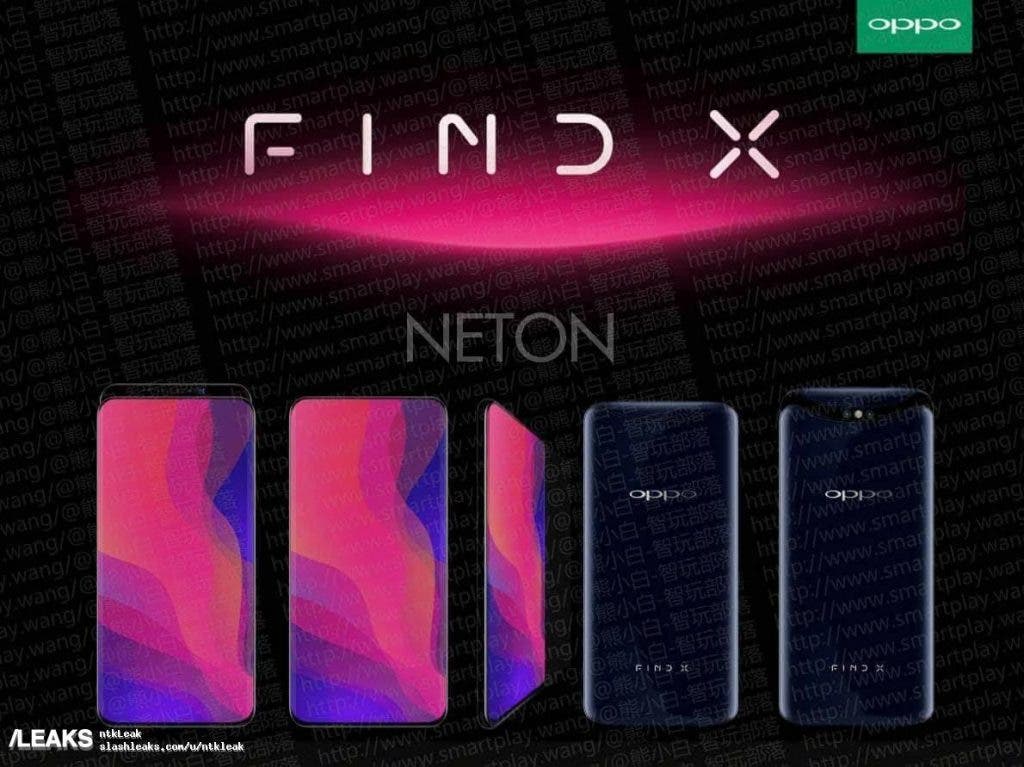 The poster is similar to the earlier one that had been reported last week. It boasts of the 93.8% screen-to-body ratio, praising the Find X as the “Phone of the Future”. The phone looks amazing with literally no bezels on the top and sides with the only significant bezel being present on the chin, which is quite thin by current standards. A side view of the phone showcases its slender build which might rule out the presence of a side mounted fingerprint scanner.

A previous report that covered a leaked ad of the Find X showed a device that had a full screen, notch-less display with a dual camera setup sitting on the curved back. It too lacked the fingerprint scanner. So either Oppo is going with an in-display fingerprint scanner or they might be completely relying on face recognition. Although that is a possibility, there is no sight of a front-facing camera or the required sensors to implement face recognition. The sketchy render provides an explanation to this; a slide-out front-facing camera. Now there is no way to confirm whether the sketchy render has any credibility so we suggest you take it with a pinch of salt. Another possibility is a front camera that is a part of the screen. But that too is mere speculation.

So far reports say that the Oppo Find X will sport a 6.4-inch 2340 x 1080p display, Qualcomm Snapdragon 845 coupled with 8GB RAM and 128GB storage with a higher memory variant sporting 8GB RAM and 256GB storage. Powering the phone should be a 3730mAh battery. Will Find X live up to the hype it has created or will it be as much a disappointment as the Lenovo Z5? We will know for sure on the 19th of this month.

Previous Meizu 16 and 16 Plus Specifications and Pricing Leaked; Snapdragon 845, 710 in Tow

Next Xiaomi Mi 8 To Sell Again Tomorrow: This Is Becoming Boring