Today is the launch of the first Oppo flagship in four years – the Oppo Find X. It might not be called Find X or it might be called N5, we don’t know. But for the first time, we have some whispers about the pricing of the phone. Given the amount up tech that Oppo is cramming in there, this is bound to be the priciest Oppo phone. How much? Murmurs on Weibo has revealed some interesting stuff. Below is an image that compares the Chinese prices of various flagships including the Find X. 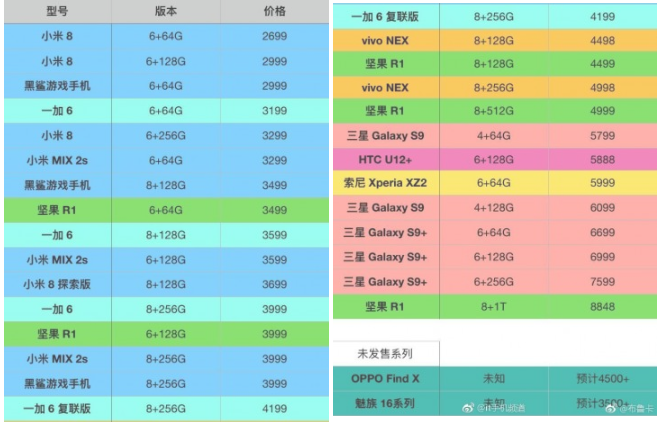 The Find x is at the bottom of the list bearing a price tag of 4500+ Yuan. However, it isn’t declared which variant could have this price, we’re presuming it to be the base model. This price is modest when compared to the likes of the Galaxy S9 and it is on par with the Vivo Nex. That is almost $700 but the handset is arguably better than the Vivo Nex in almost all ways (considering the most likely features and specs). Also, if Oppo is using Samsung’s curved OLED panels, that alone would add $100 to Oppo’s bill. This is a highly speculative and doubtful price for now. But we hope that Oppo at least prices the handset competitively.

The Find X is confirmed to have an 8GB + 256GB variant and there are rumblings of a 128GB model and even a 512GB which is a bit of a far stretch. The handset is also getting the biggest screen-to-body ratio in the industry – 93.8 percent. Besides, it will likely feature Super VOOC, and a slide out camera. The launch is in Paris at 8:45 PM (GMT+2).

Next Xiaomi Mi A2 Structure Based On Xiaomi Mi 6X Build