Xiaomi launched the Redmi 6 and Redmi 6 on June 12 but the Redmi 6 Pro was missing at the event. Since the notch-ed handset had passed TENAA, launch was inevitable but it was just a matter of time. Xiaomi has finally declared a launch date for the handset on its official Weibo handle. The Redmi 6 Pro launches on June 25.

As for what the phone has to offer, it’s an open book to see. The Redmi 6 Pro will be an entry-mid level handset with a display measuring 5.45-inches Full-HD+ resolution and 19:9 aspect ratio. It will also be powered by a Snapdragon 625 chip unlike its brethren that had new Helio chips. While RAM and storage variants are not known, it is expected to get 2GB RAM+16GB storage, 3GB RAM+32GB storage, and 4GB RAM+64GB versions.

The Redmi 6 Pro also features dual rear cameras, 12MP + 5MP to be exact with support for PDAF, 1080p recording . The front camera will be 5MP. It has a 3,900mAh battery that is a wee bit smaller than the previous generation. Android 8.1 Oreo will grace the screens of the 6 Pro units.

Prices of the handset are not known but it should be more expensive than the Redmi 6 which has a Helio P22 chispet. The Mi Pad 4 also releases on the same date after which we’re expecting an Indian launchto follow soon. 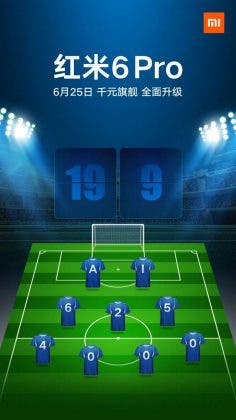 Next Oppo Find X Lamborghini Edition has an eye-watering price of 1,699 Euros