The ZTE saga which dragged for a couple of months was brought to an end a few weeks ago when the company reached an agreement with the United States government. In addition to huge fines, ZTE was also required to replace the entire board of directors and senior management team of ZTE Corporation and ZTE Kangson Electronics Corporation. Yesterday, at the ZTE Annual General Meeting of Shareholders, the division newly nominated five non-independent directors and three independent non-executive directors as required, and it formally announced that a total of fourteen members of the original board of directors had submitted their resignations. 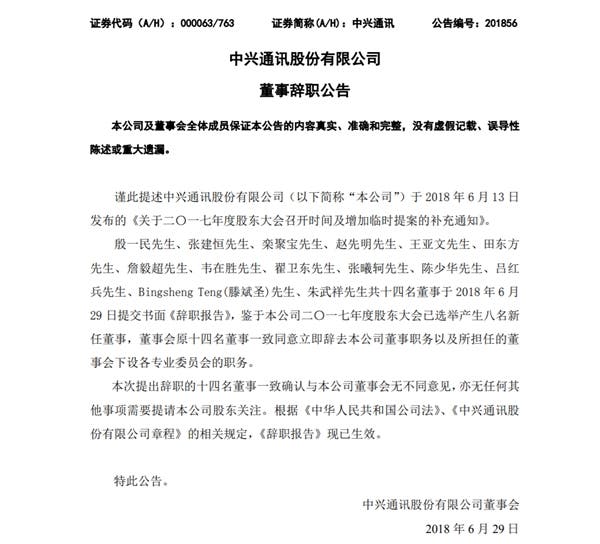 The announcement of the resignation of directors of ZTE Communications Ltd. revealed that Mr. Yin Yimin, Mr. Zhang Jianheng, Mr. Ju Jubao, Mr. Zhao Xianming, Mr. Wang Yawen, Mr. Tian Dongfang, Mr. Zhan Yichao, Mr. Wei Zaisheng, Mr. Yu Weidong, Mr. Zhang Yu, Mr. Chen Shaohua, Mr. Lu Hongbing, Mr. Bingsheng Teng (Teng Binsheng), and Mr. Zhu Wuxiang,  submitted a written “Resignation Report” on June 29, 2018, in view of the eight new directors elected by the company at the annual general meeting of shareholders. The 14 original directors unanimously agreed to immediately resign from the position of director of the company and the duties of the board of directors established by the board of directors.

After this personnel change, Li Zixue, who has a rich background in microelectronics technology research and development, was selected as the chairman of the board. He said at the meeting that his main interest is “to boost the company’s confidence” so that the United States can resume production as soon as possible.