A leaked photo detailing the pricing options of the Xiaomi Mi Mix 3 has made its way online. The listing looks sketchy but it’s all we have with regards to the pricing of the Mix 3. From the looks of it, the Mix 3 will probably come in two variants, the standard and the ceramic variant with multiple memory options. 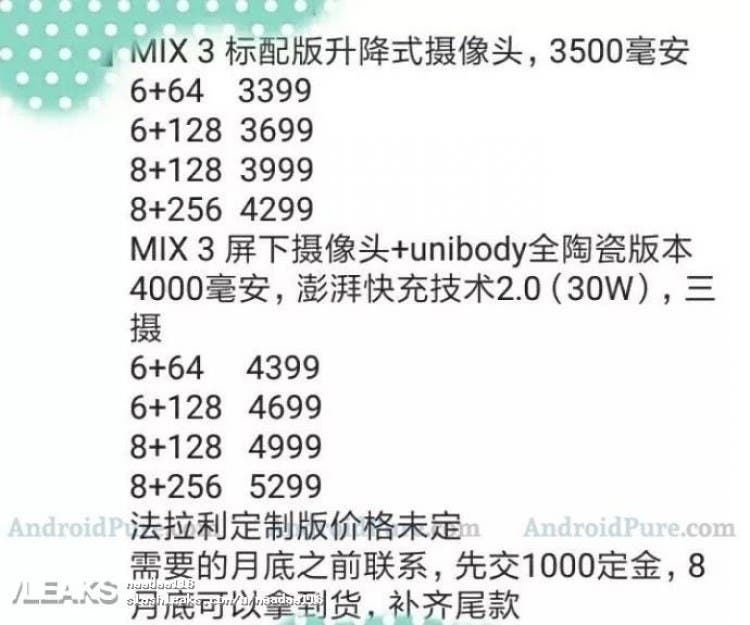 There are a few parts of this leak that made me raise my eyebrows, literally. First up is the standard variant which will apparently have a “lift camera”. This might be a reference to the pop-up camera that has been rumoured to be a part of the Mi Mix 3. It has been listed with 4 memory variants:

The second mentioned variant is apparently a ceramic one that reportedly sports a 4000mAh battery with support for 30W fast charging. The highlight is the “screen camera” which seems to be senseless but is not. It might be a reference to an under-display screen camera or perhaps using the screen as a camera. This would remove the need for the top bezel or any motorized parts for the front camera. Another notable detail is the “three photos” which might be a reference to a triple camera setup on the back. Huawei has already done it with the P20 Pro so it should not come as a surprise.

These are wild speculations that are based upon a loose translation of the reported image. They might all be true or even false. But in case the speculations are true, the Xiaomi Mi Mix 3 is going to take the market by storm. The launch date of the Mix 3 is anything but confirm. Xiaomi has not revealed a lot about it either but we hope to see more reports coming in. Stay tuned!