Meizu’s 16 and 16 Plus are due to launch next month in China. Much info about the flagship duo has been shared on Meizu’s forums till now by the company’s founder. However, there’s still little we know about the visual side of things, aside from some sketchy live images. However, a reliable tipster has just posted pictures of what is supposedly the front panels of the Meizu 16 & Meizu 16 Plus. 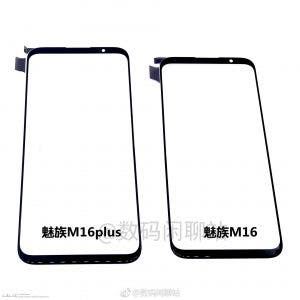 Thanks to the front panels, we’re now more confident that the rumoured thin bezel design on the Meizu 16 will actually turn out to be real. Sadly, the sizes and measurements of the display panels were not shared so we’re not sure how big each of the two phones is. There’s a small cutout for the front camera on the panel and no place for a fingerprint reader on the front bezels. This sits well with the CEO’s comments of an in-display fingerprint reader. Also, an image of a live Meizu 16 leaked last week that also showed an on-screen sensor.

The leaked panels are also in line with a purported poster of the Meizu 16 that we reported four days back. Fresh info is that the smartphone will also support wireless charging although it isn’t known whether both models of the handset will support it or not.

There will also be a Snapdragon 710 variant of the phone and current info suggests the flagship will arrive on August 26. We’ve got a lot of info written up over the Meizu 16. You can check it out here.