The Redmond giant, Microsoft, after years of experimenting with its own mobile OS with little or no success, back in 2017 retired its Windows mobile OS, but that never quashed its dream of been a player in the smartphone market, it instead shifted focus to releasing software and services for both Android and iOS users. And while the company is rumored to be working on a surface phone codenamed Andromeda, tipped for possible release later in 2019, reports making the rounds suggest the computer giant may not have entirely given up on making consumer smartphones.

A Microsoft store rep has confirmed that the Redmond giant is working on Microsft branded smartphones destined for early 2019 release, however, the companying this time around would be opting for the Android mobile OS. The latest revelation comes from a Microsoft store representative who claims to be certain its company is preparing a Microsft Android phone possible for early 2019 unveiling.

Although the information given by store reps sometimes aren’t trustworthy, the rep as you can see from the images below appears to be very certain of the information he dished out even though he has no details of the purported Microsft branded Android phone,  so we might wish to take this with some level of certainty. 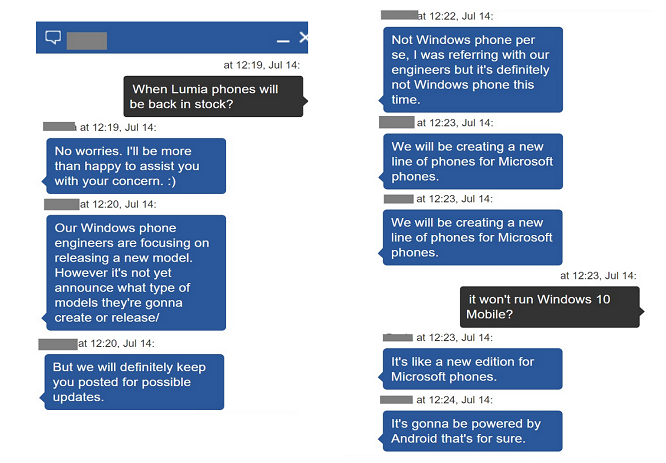 While the idea of a Microsoft branded Android phone sounds plausible, it is much likely the store rep is referring to a Microsft edition Android phone from third party OEMs. As for release date, early 2019 could mean the device might be launched at the CES 2019. Do note that this is just mere rumor at this point in time, Microsft is yet to officially confirm the report.