Inspite of earlier reports and leaks towards the existence of a Mi Max 3 Pro version, there were no signs of the handset at the Mi Max 3 launch event, not even an official statement. However, after the launch, the “Mi Max 3 Pro” moniker was seen on Qualcomm’s website in the list of Snapdragon 710-fueled devices. The list was considerably short with the Vivo Nex and the Mi 8 SE also making an appearance. 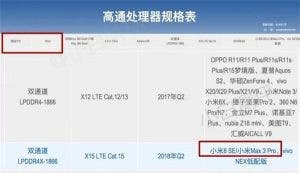 This is solid proof of the existence of the device. The only question is, why would Xiaomi not even issue a statement over it at the Mi Max 3 launch event. Well, the answers are not known for now. To reiterate the finding, the handset was also found on some e-commerce portals like JD.com. If all this pans out to be true, the Mi Max 3 Pro could launch sooner rather than later.

The Mi Max 3 Pro doesn’t have any other major differences compared to the Mi Max 3 that was launched just last week. It is powered by the Snapdragon 636 which is no slouch either and starts at 1,699 Yuan ($250). Being a very popular device overseas, the Mi Max 3 is bound to go global in the coming months after an official statement.

Next Samsung Magbee is the Next Smart Speaker, Might be Revealed at IFA 2018