The Nokia X6 (Nokia 6.1 Plus) has finally managed to escape the clutches of the Chinese market with a launch in Hong Kong. Now, its Indian launch is probably just a matter of time. While there are still no signs from Nokia, a recent user manual spotting with Indian SAR values has piqued our interest. The user guide page was actually spotted on the official India website of Nokia, says Nokiapoweruser. 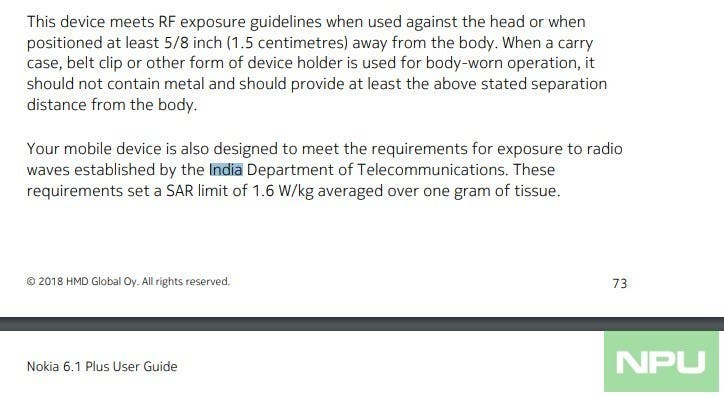 The blog has also cross-checked the SAR values with the Hong Kong version and it has verified the info to be “correct and valid”. This might hint at an early arrival of the handset in India than the presumed August-September launch window. If we would be optimistic, we can say that an August launch looks likely in the best of cases.

As for the Nokia 6.1 Plus in Hong Kong, it has left us very unimpressed in terms of Nokia’s pricing. And we fear, if the same thing happens in India, then the Nokia 6.1 Plus will lose all its previously accumulated hotness from China. The Nokia 6.1 Plus was priced around $300 which is like $80-$100 more than its Chinese pricing. That kind of a bump would surely kill all good future prospects of the handset. Also, the handset was launched in just one variant, however, the same will probably not happen in India. In related news, HMD Global has also confirmed that the Nokia X5 will soon launch outside of China.