The 5G era is definitely on its way and we might start seeing 5G devices from the end of this year. However, there has been the issue of how to make the chip small enough to fit into a handheld device.  Now Qualcomm has introduced the QTM052 millimeter wave antenna module and Qualcomm QPM56xx RF modules which is designed to work with Snapdragon X50 to bring smartphones to new heights. They will be active in bands between 3.3GHz to 5.0GHz and supports MIMO for improved reception. 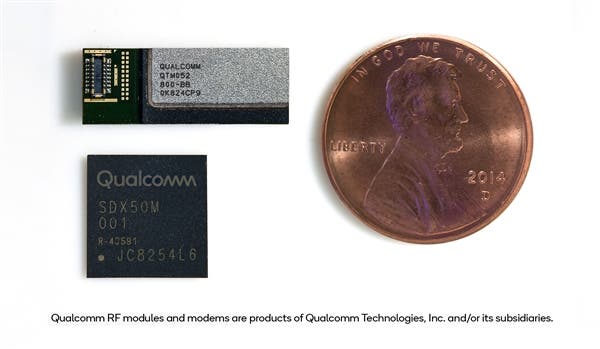 With the new module, manufacturers can make the device cover the 5G band, including the millimeter wave band. Its transmission distance is shorter, but the speed is faster, and there are bands below 6GHz, which is more reliable, but slower. Later this year, mobile hotspots will use these new modules, and smartphones will be introduced in the first half of next year. If you use millimeter wave transmission, the peak downlink speed can reach 5Gbps, but on mobile phones, the more realistic speed is close to 1.4Gbps.

The current speed of today’s 4G network is only 70Mbps. If you use a frequency band below 6GHz, the speed can reach 400Mbps-500Mbps. Although the speed is very fast with millimeter wave transmission, there are many problems. For example, the distance of the signal transmission is short and when it encounters a hard surface, it will bounce, and cannot bypass the corner or penetrate objects such as trees. Qualcomm said that although the maximum downstream speed of millimeter waves can reach 5Gbps, as long as the hand is blocked by the antenna, the signal will be blocked. There is no such problem in the frequency band below 600MHz. This band is used by 5G, but its speed is not as fast as millimeter wave.

At the beginning of 2017, Qualcomm showcased 5G modems and millimeter-wave antennas, which were large in size and actually moved on a trolley. At the MWC in February this year, Intel unveiled a 5G PC concept machine, which installed the 5G modem in a bracket. Obviously, such a module is too big for a smartphone. Now, Qualcomm has succeeded in shrinking the module and it can fit into a phone. Shef Hanna, Qualcomm’s director of product marketing, said “Everyone agrees that it is impossible to put a millimeter wave technology into mobile devices. But Qualcomm’s new module has made breakthroughs in technology…the network transmits wireless signals, and the network speed has reached an unprecedented level .”

What is the size of the new module? Qualcomm did not disclose this information but it is believed to be about 7.7 mm. Reports also have it that Qualcomm has thinner modules for smaller smartphones.  Qualcomm added that the thickness of the module does not necessarily mean the phone will be thick. It can be systematically placed so that it fits perfectly into the device.

Next Oppo Patents a Smartphone with Secondary Display