A couple of days ago, we reported that Xiaomi is set to release the MIUI 10 system to more Xiaomi devices on July 23. This didn’t happen as the company announced on its Chinese MIUI Forum. However, the update is only two weeks late as it is currently available for the third batch of Xiaomi devices. The MIUI 10 update has been released for additional 11 models which takes the total number of Xiaomi devices with this update to 40 (20 Mi devices and 20 Redmi phones). MIUI 10 was officially released on May 31, and the internal testing was started simultaneously. On June 19, the first batch received the beta update while the second batch received theirs on July 13. 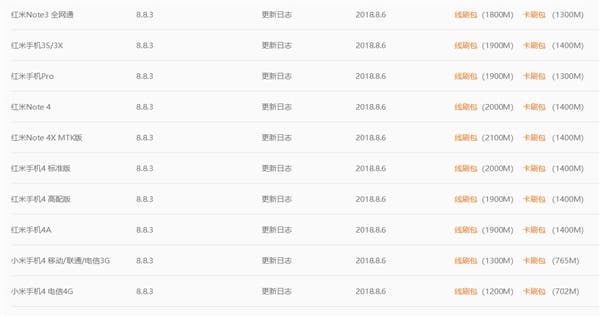 Everyone is obviously curious to know the devices that make this list but it is not surprising that Xiaomi is including a device from four years ago, Xiaomi Mi 4. The devices to get this update include

According to the official introduction, the new MIUI 10 system is based on AI deep learning. MIUI 10 prejudges Apps to be used and preloads in the background so that when the user eventually launches the App,  it takes zero seconds to boot. MIUI 10 also focuses on optimizing the system’s operation such that it feels smooth when sliding the screen. In addition, on MIUI 10, full-screen gestures replace the traditional virtual buttons. You can now slide back to the desktop, or slide up and hover to enter the multitasking interface.

1. For MIUI6/7/8/9 development users, you can go to “Settings→My Device→MIUI Version” and upgrade online.

2. MIUI6/7/8/9 stable version users, it is recommended to download the upgrade package from HERE.