After releasing the HTC U12 Plus, HTC completed the flagship section on its portfolio of smartphones. Now, it’s time for the company to release a more affordable option, for those who can’t pay for a flagship, but also want a premium looking handset. Based on this, the rumor mill has been giving life to a midrange smartphone called HTC U12 Life.

The handset in question is supposedly going to be released in just a couple of days, more precisely on August 30th. Although the handset isn’t available yet, nothing can stop the violent nature of leaks that insist to reveal the smartphone before the time.

The latest leaks come from the realms of GeekBench, revealing a benchmark from a mysterious device called HTC “2Q6E1.” The leaks and previous rumors are indicating that this handset is, in fact, the newest HTC midrange smartphone – HTC U12 Life. 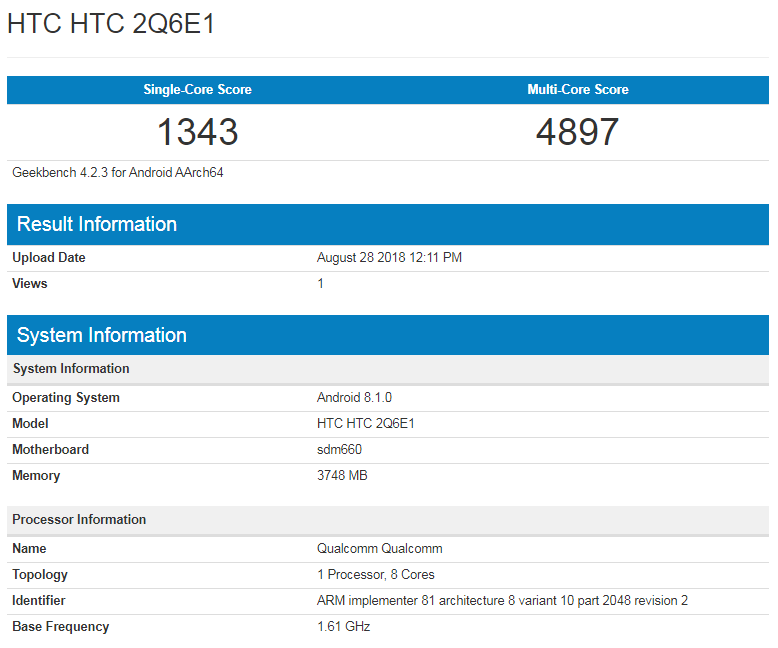 The handset achieved a 1343 score in the Single-Core tests and 4897 for the Multi-Score. While the device’s motherboard says “sdm660”, judging by the base frequency, we believe that this processor is the Snapdragon 636, which basically is an underclocked version of the Snapdragon 660. Furthermore, the SD636 has a BIG Quad 1.8GHz cluster and a little cluster with four 1.6GHz cores.

The HTC U12 Life multi-tasking purposes will be ensured by 4GB of RAM and the storage amount should start at 64GB. While the handset will not carry flagship specs, it will surely be a decent midrange smartphone. Let’s see if it will indeed arrive two days ahead on August 30th.