Forget the Galaxy Note 9 from Samsung, the next generation of Google’s Pixel line of smartphones are two devices that will, without a doubt, cause a stir in smartphones World in the next few months. With a purported October 9 unveiling date, the Pixel 3 and Pixel 3 XL have both suffered a number of leaks in the past couple of days, and it appears it won’t slow down even as we approach the said October 9 date.

It’s been on a public transit earlier in Toronto, it’s reportedly been stolen and offered for sale in the black market, certified by the FCC, while some idiot even left the Pixel 3 XL in the back of a Lyft just recently. And in case these aren’t enough to prove that the Pixel 3 and Pixel 3XL might be arriving soon, both devices have once again passed another major pre-release hurdle. 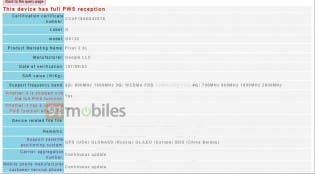 The NCC in Taiwan has now certified the Pixel 3 and Pixel 3 XL in the country with the model number G013A and G013C respectively. And while the certification page for doesn’t mention any specs details, it does reveal that both devices were submitted for approval by Google itself, which once again cement previous rumors that suggest these devices are been made by Google’s internal engineers, and not by HTC or LG as was the case with previous Pixel phones.

Of course, we already know what to expect from both devices in terms of their internals, but nothing is official until Google unveils the Pixel 3 XL along with the no-notch Pixel 3 on October 9th at an event in New York City.

Next LG Q9 with Snapdragon 660 SoC in the offing, reveals tipster