The Meizu 16 is the second flagship from Meizu in less than six months and it represents the pinnacle of the brand’s efforts in 2018. It represents the company’s change in strategy as the brand no longer wants to play just a mid-range and entry-level game. With the 16 (or as they say, 16th), Meizu once again wants a ticket to the big league. The Meizu 16th represents a lot of things, but let’s just say, above all the phone maker wants it to be a smashing hit in the premium smartphone arena. Will it be able to do that? Will it threaten stalwarts likes the Mi 8, the OnePlus 6?

We’ll find out in this full review of the Meizu 16. 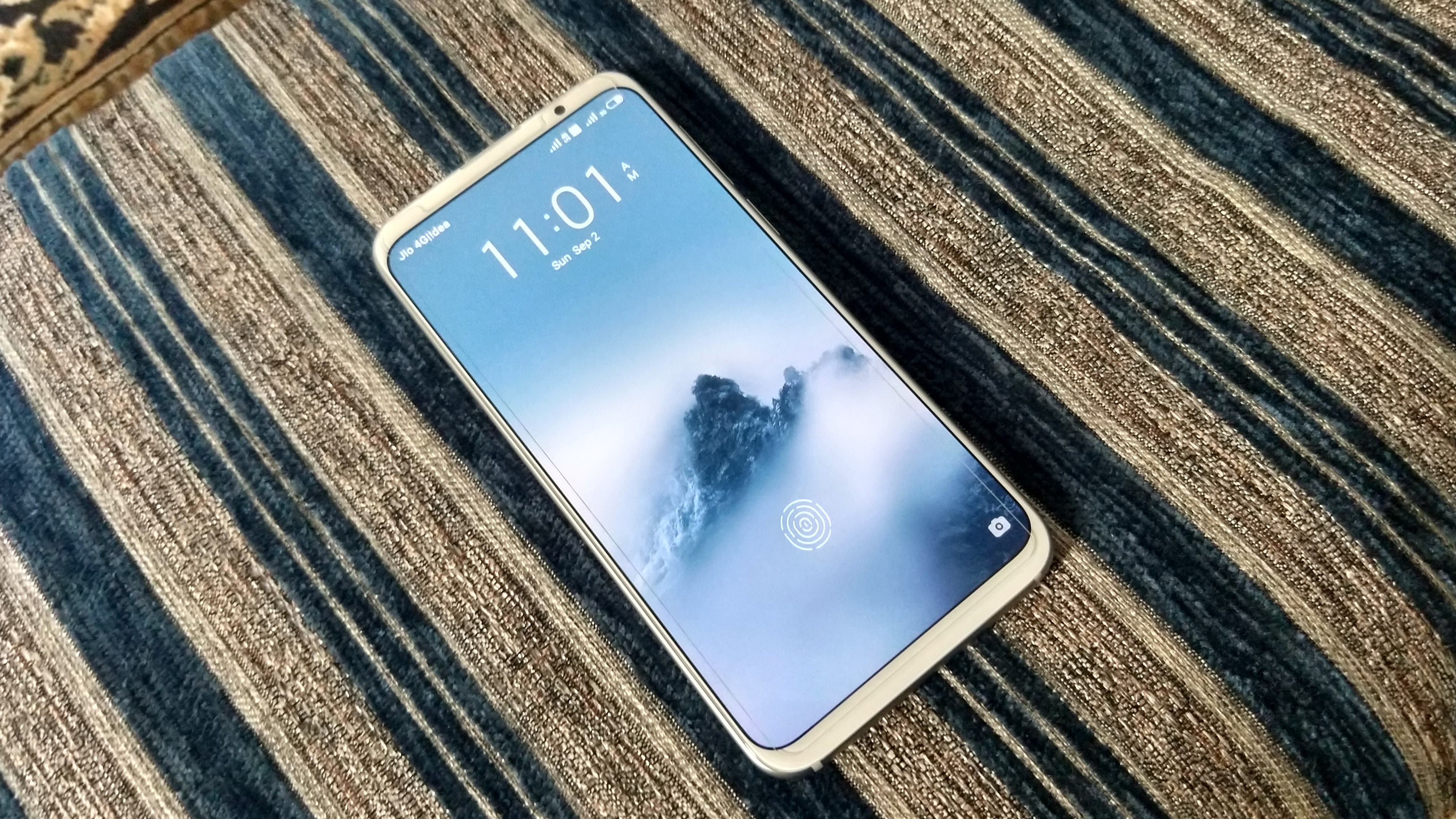 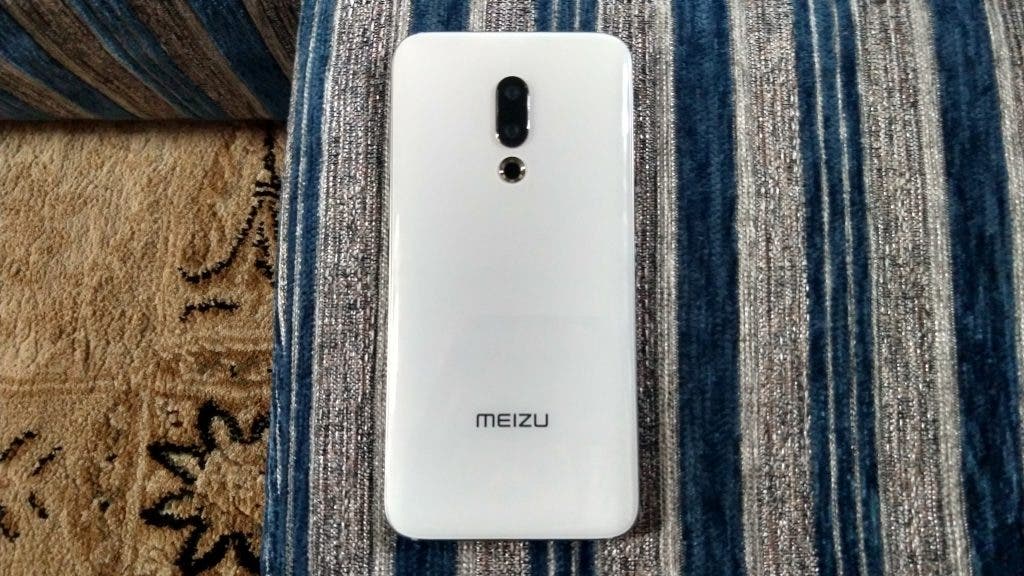 The Meizu 16’s awesome design is truly one to look at and marvel at. You’ll know what i mean when you see the front screen pushing the bezels out of the phone to their death. And Meizu should get brownie points for doing this without reaching for an easy notch solution that everyone in the industry has been doing for the past year. The result is a 92.18% non-intrusive screen real estate and it commands attention for sure. I’ve been using the device for some time and every time I’ve walked into a crowd, this phone gets the gazes and along with it, me as well. Meizu said at the launch event that they have poured hundreds of millions of dollars to cram sensors on the mini bezel at the top and here is the finished product. There’s a small LED as well on the top bezel but it lights up for low battery notifications only and no other stuff. 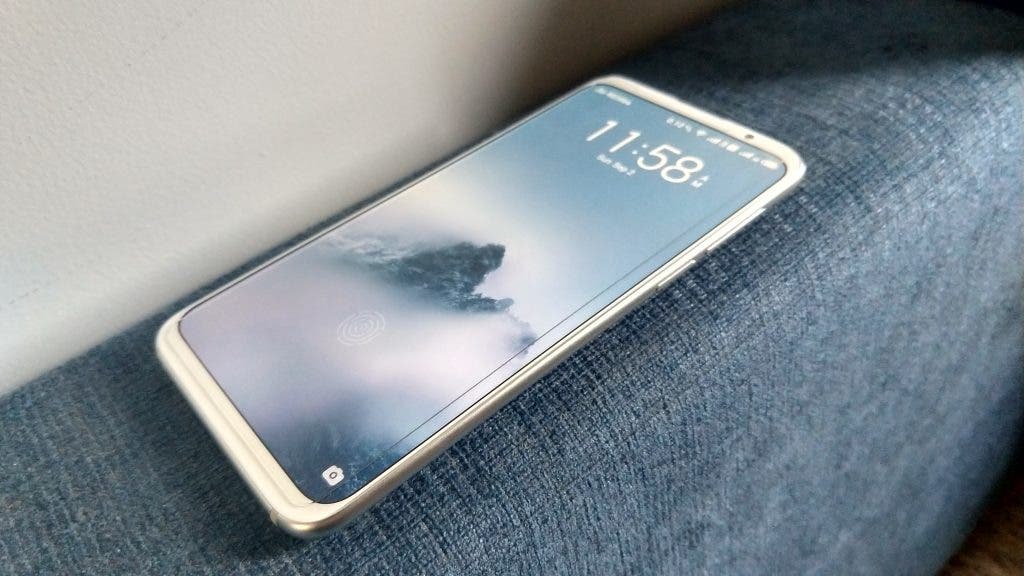 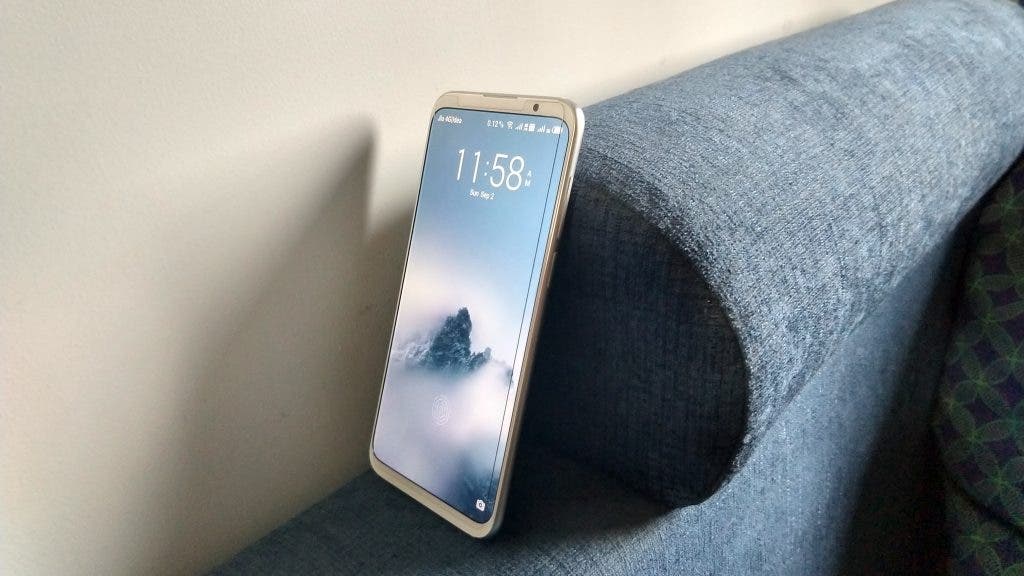 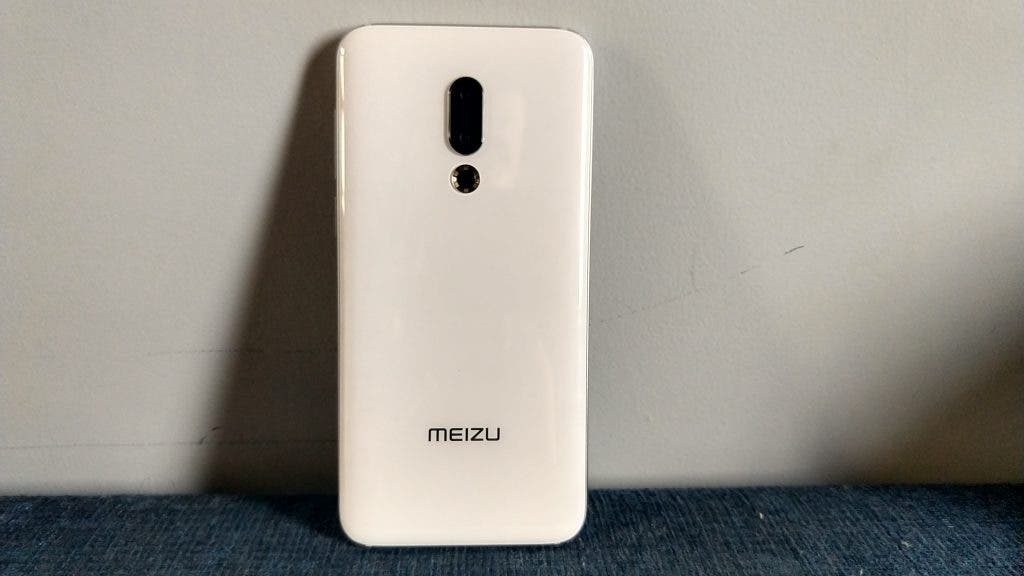 That’s half of the design story. The rear of the design is also very well done. It’s a chassis befitting a flagship. The metal back is coated by a 7 layering process of glass that makes it look like ceramic and is completely minimalistic. The edges curve ever so slightly giving the phone a very good in-hand feel. The rear camera housing is indented and rises above the rest of the surface. Meizu has included a transparent case and you might want to slap it on as the back can get scratched easily. Thankfully for us, we have a White version and we’ve been spared from the fingerprint smudge-fest that is otherwise quite visible on other shades. A word of caution though. Due to being a completely glossy glass finish, the Meizu 16 has to be handled with firm grip. I found the device to be super slippery and it gave me the jitters a couple of times when it could have slipped from my hands. Overall, the design is one of the standouts of the Meizu 16 and for that we’d say, mission accomplished!

The  6.0-inch AMOLED display of the handset gives users a great immersive experience, thanks to those nonexistent bezels on the top and bottom. It is crisp, vibrant, and viewing angles are good. However, outdoor visibility isn’t top notch but it isn’t something you would regret too much. Playing games on the display is very entertaining. In short, I don’t have any qualms for about the display. Being a 6.0 incher, it is great for one-handed use for me personally as I have big hands.

Since we’re talking about the overall performance, there are two factors here. The Snapdragon 845 with 8GB of RAM is one. It makes light of everything you throw at it. I played a number of games on it with ease. These include those titles that don’t task the CPU heavily as well as some heavy duty ones like PUBG too. My unit has Play Store and other Google Apps pre-installed and the model number M822H is certified by the EEC. So, this could be a European version. Also, there’s almost no bloatware on the device except for some Meizu tools like ToolBox and Recorder which have handy features. Take a look at the AnTuTu score below.

The other factor is Flyme OS. This is where I have some feedback for Meizu. Despite such ample fire power sitting at its heart, I noticed lag while doing some mundane tasks albeit not for long. But that’s not the real issue. The first few days were great. And then suddenly one day, my unit started to freeze in the middle of nowhere. This happened around 8 times over the course of just a few hours and there was no pattern to it. It would freeze anywhere and restarting it was the only way I could resume using it. Now, this could be a one-off issue with just my review unit but I have got in touch with their personnel to resolve the issue.

Update: I tried to find a solution to the problem and changed the default system launcher with a Rootless Pixel Launcher and the issue seems to have vanished. There has no been a single free till date since then.

Also, Flyme OS doesn’t let you change wallpapers, at least a number of review units I checked didn’t have it. Again, this issue is also totally fixable with updates. So I won’t roast the company on this. Also, RAM management could be better, especially with 8GB you could do a lot more. My unit kept four apps in the cache but beyond that, it would have to reload them as I tried it more than once. One more thing that Meizu needs to fix is the notification system. Some apps simply don’t send notifications at all for no reason. For example, ever since i started using the device, i have never received Slack notifications unless i activated the app. This probably means Flyme OS kills the app in the background but i couldn’t do anything to prevent it. Similarly, other apps also shared the same fate. These are the bugs Meizu needs to fix as soon as possible.

Besides these minor qualms, Flyme OS is Flyme OS. A lot of the UX remains the same. You still don’t get an app drawer. You get an mBack gesture option that allows swipe from corners to go back. This is something I’ve always preferred instead of the bottom screen gestures. Other small and nifty features like swiping down for the notification shade, swiping up for the universal search, double tap to wake the screen are all very nice and useful additions. Dropping the notification shade, there are quick toggles for screenshots, screen recording, eye-friendly mode for night and some more all of which are very useful. Meizu debuted something called Super Swipe that is software working behind the scenes to vastly improve touch response. Then there’s mEngine 2.0, a new haptic feedback motor in the Meizu 16th that is supposed to be customizable. However, i didn’t find any setting to customize it whatsoever on my phone.

Read Also:  Google One will become the default backup system for Android devices

The on-screen fingerprint reader is one of the main attractions of the Meizu 16th and it works. Meizu does need to work on the accuracy of the sensor but considering the tech is in its infancy, and the price point at which Meizu offers it, it is mind-blowing. Props to the company for doing that. There’s also face scanning and it is really fast. It works very well in daylight but not so well in dark situations. However, it is much faster than the on screen biometric.  That’s pretty much it for the performance and features. Overall, the Meizu 16th is a reliable workhorse and you won’t feel short of power when you need it.

I’ve had no troubles with calls. Reception is great, and the Meizu 16th supports VoLTE. However, you need to activate it from settings to make calls over Jio’s VoLTE network which I use. Voice is crisp and clear over the earpiece and it’s great. As for speakers, I’m very happy with them. Meizu’s dual speaker setup helps in even crowded public areas and you can hear your phone’s volume. At top level it quite louder than the average phone and a good plus to have.

The battery on the Meizu 16th is a 3,000mAh juice pack and it has Meizu’s proprietary mCharge tech which is very close to Oppo’s VOOC in terms of speeds. It is a life saver when you have small batteries that can deplete quickly. For my unit, my usage varies from day to day. Sometimes I’m a heavy user and sometimes I’m just an average guy. When I’ve used the device heavily, I’ve had to charge it in the middle of the day.

My typical pattern in such days is a lot of YouTube, social media, and messaging with Wi-Fi always on. While for average use, it can last you by the end of the day. But expect no more. A day’s use is what you’ll get in average situations. There are two power saving modes and one particular is the aggressive ‘Super Saving Mode’ that turns off all lights and features (except for phone) and uses the AMOLED panel like Samsung uses it in the power saving mode.

Standby times aren’t the best though as I’ve seen the device lose even 7-10 percent battery overnight. I’ve had Xiaomi devices that are excellent at this and lose no more than 3 percent and if Meizu optimizes well, it can do as well. I wouldn’t mind having a bigger battery and sacrificing some slimness, but it is what it is.

Meizu has used a dual setup for the rear and the Meizu 16 captures crisp shots with good details as long as you’re in good lighting situations. Colours are natural and don’t look over-saturated. Focus is a wee bit slow and shutter speed as well. There’s 3x optical zoom on the camera and it works ok but you should expect noise obviously when you use it. Low-light performance drops a bit and you’ll see some noise and loss of sharpness. The camera app is pretty basic. It has a few modes like Panorama, Slow-mo, Time-Lapse and Pro.

There’s portrait mode for Bokeh effects for the front camera and it works but the edge detection feature needs some fine-tuning. I found its blurring to be very uneven in some cases especially with hair. On the flip side, details are well captured and the image looks crisp and has true-to-life colours. Meizu 16 has HDR mode and you have options to switch it to Auto, on or off. Of course, you do get AI beauty features and there are three levels – No beauty, light beauty, and full beauty mode.  It also does 4K video recording and I found an odd bug in the Mp4 files. I recorded the POCO F1 launch event in 4K and I played it back after saving it. For some reason, the file failed to play. This happened with other recorded videos as well. I’m not sure what this is but it needs a fix as soon as possible. I have some snaps captured from the cameras below and you want to see them. 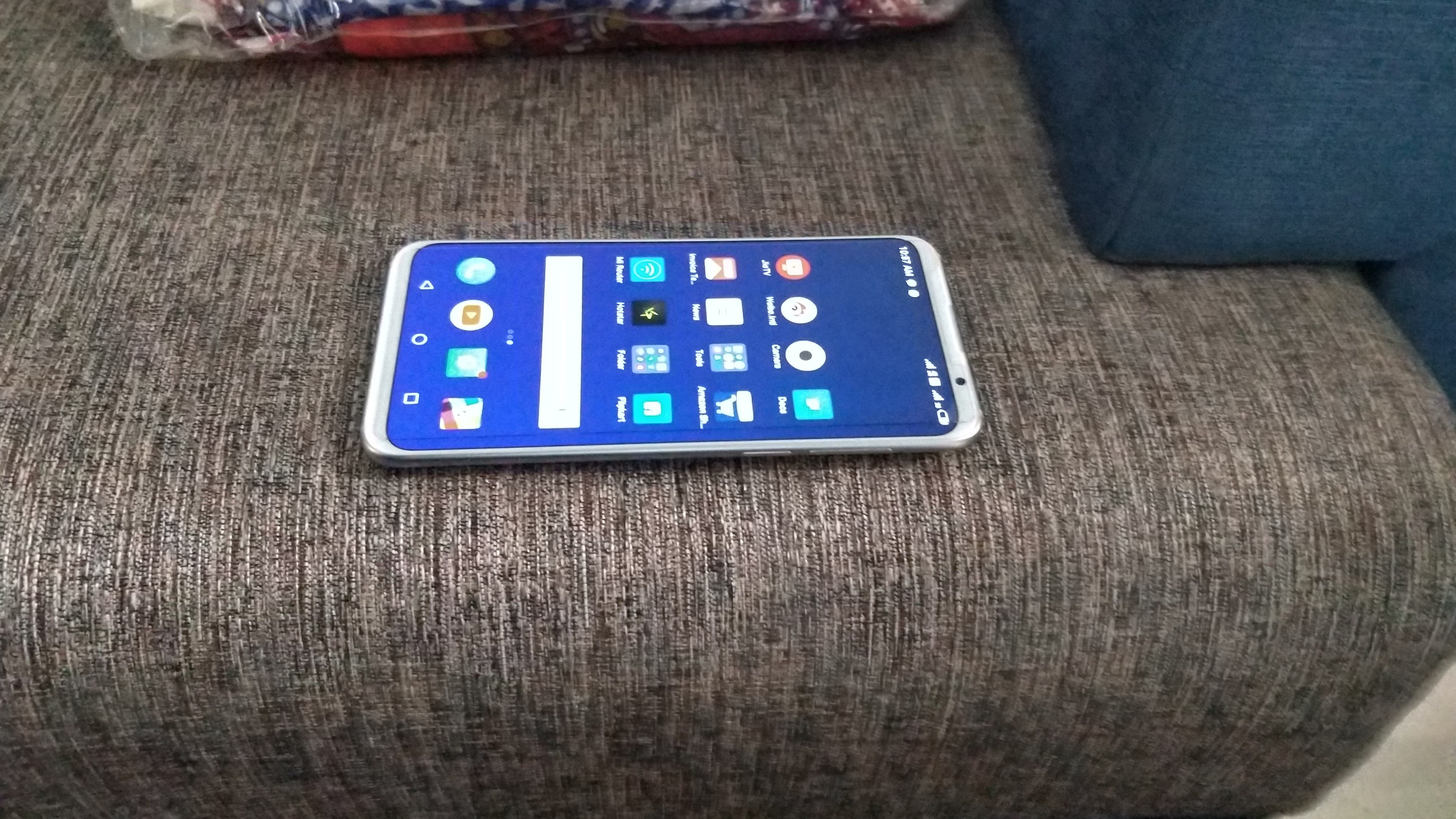 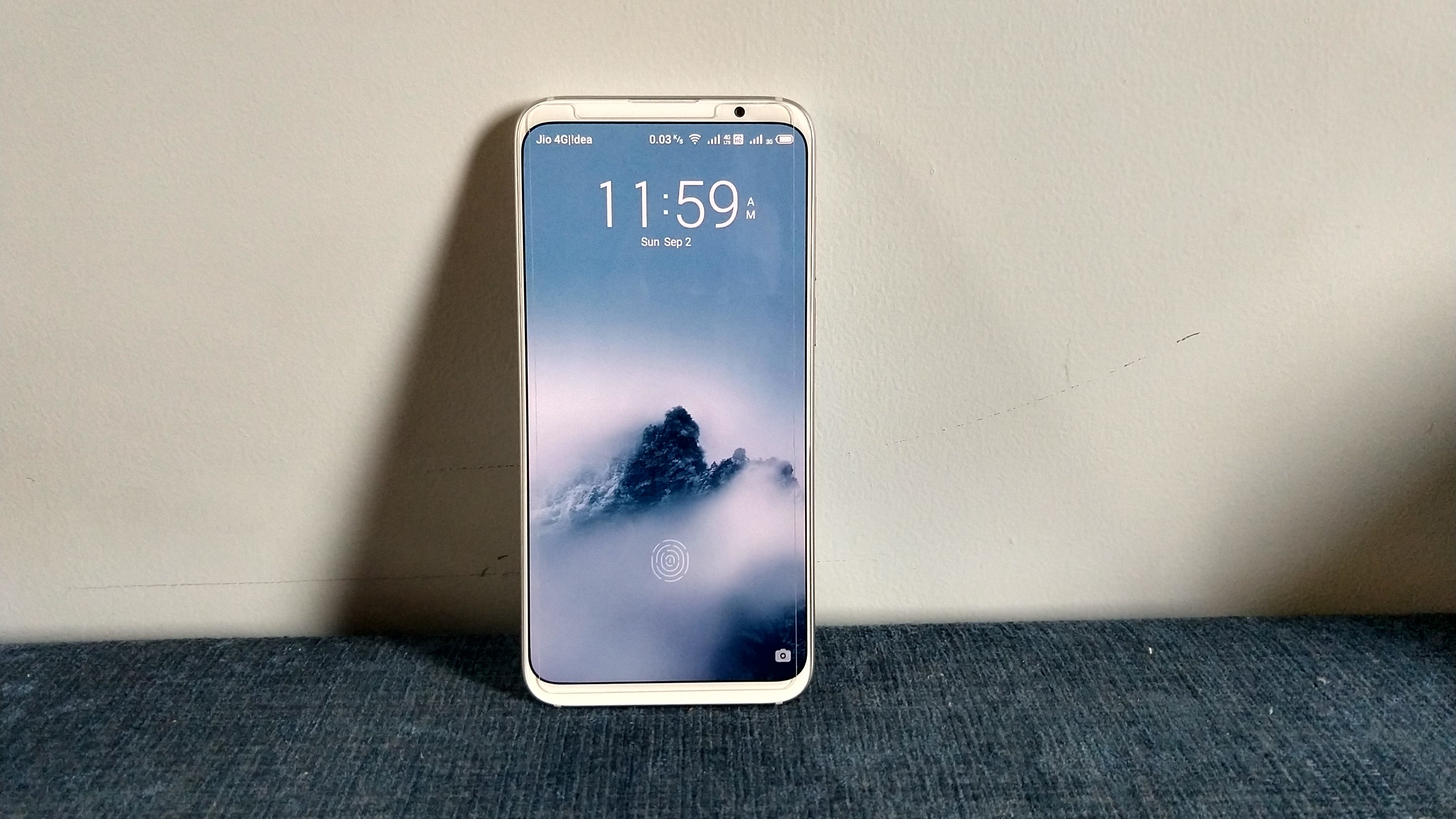 The Meizu 16th is undeniably high value for money. It has a unique killer look. It has all the firepower you will need. It has got decent battery life and fast charging and decent cameras as well. l mean for $395, what more can you expect?  If you want a flagship phone with some awesome looks and awesome performance at a budget price then it’s simple, the Meizu 16 should be your first priority.

Next Entry-level Honor 7S launching on September 4th in India