Apple’s newly released iOS 12 operating system seems to be experiencing a slower installation rate than expected. However, data from analyst firm Mixpanel shows that in the past few weeks, the iOS 12 installation rate has actually surpassed iOS 11. 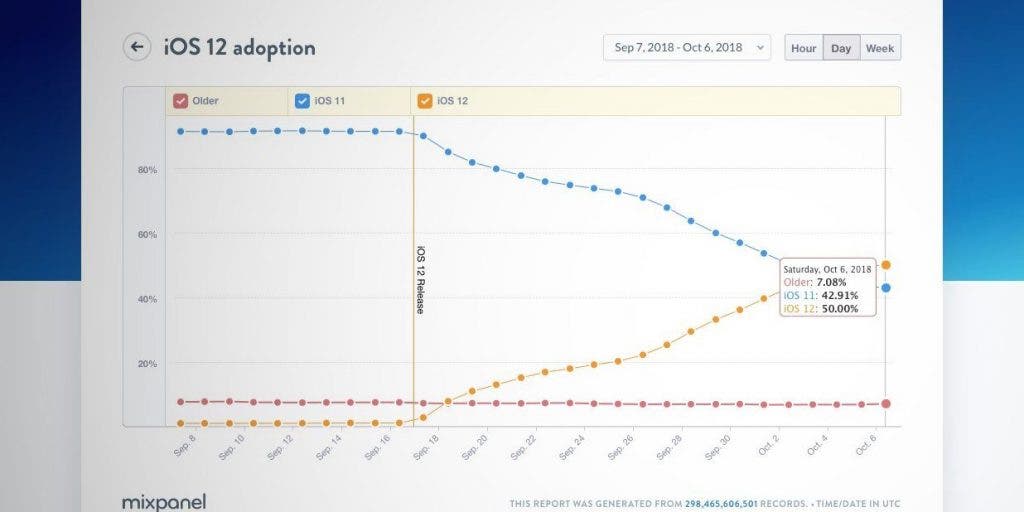 iOS 12 is currently installed on more than 50% of iPhone, iPad, and iPod touch devices. iOS 11 took a month to reach this milestone, and iOS 12 was completed it in 20 days. In contrast, there are still 42.91% of devices using iOS 11 systems, and the proportion of older systems is 7.08%. Many people think that iOS 11 is not performing well in terms of operating system updates, and there are various kinds of unstable and sluggish complaints. Apple gave its own solution in iOS 12, and the company claims that iOS 12 is paying attention to performance upgrades, especially on older iPhones and iPads.

iOS 12 supports all devices that can run iOS 11, which means that the iOS 12 user community can be extended to iPhone 5s. Despite the slow start, iOS 12 has seen a surge in install rates over the past few days, almost doubling in just 7 days. The positive response from the Apple community has also accelerated. However, Apple has not updated the official data of iOS 12, the last update of the company was on September 3 which shows that the usage rate of iOS 11 exceeded 85%. Last year, Apple’s official data showed that the iOS 11 installation rate did not exceed 50% until November.

In the future, the iOS 12 installation rate may continue to remain strong. iOS 12.1 will include some major new features, such as FaceTime Group Chat and more than 70 new emoji symbols, which always help motivate people to upgrade. There are rumors that Apple is also preparing to launch a series of new hardware pre-installed with iOS 12, including the new iPad Pro series, and of course the pre-ordered iPhone XR on October 19.

Previous This is Pixel Slate: A Chrome OS tablet with keyboard and stylus