Chinese manufacturing giant, Oppo, is getting set to unveil a new smartphone in two days. Speculations and rumours suggest that the company is going to start a brand new series, Oppo K series and the smartphone to be released will be Oppo k1. Now, an obscured real-life image of this smartphone has appeared online but sadly, we have only the front view which doesn’t really say much about the upcoming device. 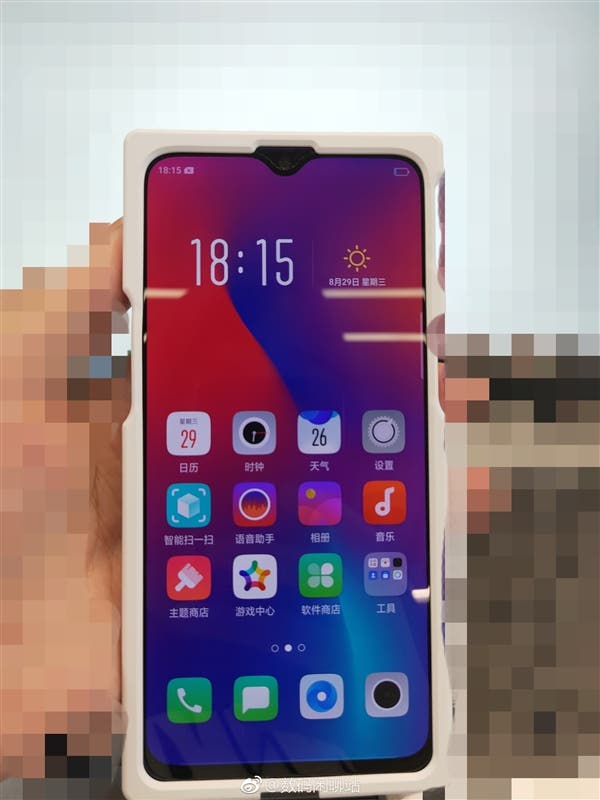 Although the image does not say much, we can see that the phone is actually lodged in an industrial case to prevent spy shots. However, this smartphone comes with a huge waterdrop notch display and it uses the latest Color OS. Previously, a new OPPO model PBCM30 was approved by TENAA and many believe that this smartphone is the OPPO K1. Its biggest highlight is support for screen fingerprint recognition. The OPPO PBCM30 uses a 6.4-inch 2340×1080 AMOLED display with an aspect ratio of 19.5:9. The screen size and resolution are the same as those of OPPO R17.

It is powered by a Qualcomm Snapdragon 660 SoC (backed by Adreno 512 GPU) clocking 1.95GHz coupled with 4GB+64GB and 6GB+128GB configurations. In the camera department, we have a 25MP selfie shooter which continues Oppo’s love for huge front cameras and a 16MP+2MP dual rear cameras. The lights of this smartphone will be kept on by a 3500 mAh battery. According to several reports, this OPPO series will be cost-effective.