Oppo is readying another version of the capable mid-range Android smartphone Oppo R17. Specifications of the new variant have leaked online revealing several interesting aspects about the new device that Oppo hasn’t even officially acknowledged yet.

The Oppo R17 Neo appears to be a close replica of the R17. It shares several key specifications, starting with the display. According to the leaked specifications, the R17 Neo features 6.41-inch Full HD+ AMOLED display with 1080 x 2340 pixels. Although, not yet mentioned, the resolution implies the presence of a waterdrop notch.

The main difference between the Oppo R17 and the R17 Neo appears in the processor and memory configuration. The R17 Neo is packing Qualcomm Snapdragon 660 instead of the Snapdragon 710. The processor works with Adreno 512 GPU. The SoC is paired with 4GB of RAM instead of 6GB/8GB options, but packs the same 128GB of internal storage. Hybrid dual SIM slot allows memory expansion by up to 256GB.

There’s a slight difference in the camera department in the R17 Neo. It packs a 16MP + 2MP dual camera setup on the back and a 25MP front-facing camera. The primary camera comes with f/1.75 aperture, and the secondary unit has f/2.4 aperture. The front camera has f/2.0 aperture. The secondary camera on the Oppo R17 has a slightly larger 5MP lens. The rest of the setup is identical to the R17. 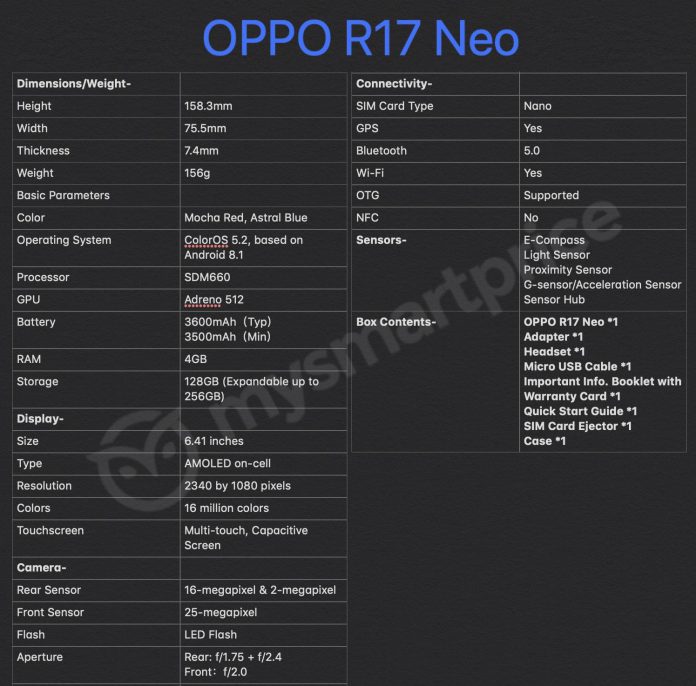 The Oppo R17 Neo gets dual 4G VoLTE, a USB Type-C Port, Bluetooth 5.0 LE, and a slightly larger 3600mAh battery that may or may not support VOOC Flash Charge. The handset measures 158.3 x 75.5 x 7.4 mm and weighs 156 grams. The mid-range Android handset will launch in Mocha Red and Astral Blue color options. Similar to the Oppo R17, the R17 Neo will run on the ColorOS 5.2 UI by Oppo, which is based on Android 8.1 Oreo.

Except for the processor, RAM, and perhaps the VOOC charge support, the Oppo R17 Neo is identical to the R17. Owing to the usage of a different and slightly older CPU, it is quite likely the smartphone will sport a lower price tag. The Oppo R17 is yet to officially launch in India. The Opp R17 Neo could be the entry-level variant of the Oppo R-Series.