Like almost all mobile phone conferences, when Huawei promoted the Mate 20 series, it also constantly compared its camera with its rivals, such as the iPhone XS Max and the Samsung Galaxy Note 9.

Samsung officially issued a document today called “Official Xuan : Really Shooting the Beauty of the Night” and showed a night shot of Note 9 in the picture, and it is emphasized that this is “from the real dark light beauty”. Obviously, this is a direct response to the comparative publicity at the Huawei conference.

Some people have questioned Huawei’s unfairness because Mate 20 Pro has a very high sensitivity and a very long exposure time, but it is also true. After all, iPhone XS Max and Note 9 are indeed much worse on these two indicators.

Because of this, Samsung did not directly accuse Huawei of the unfair contrast, but emphasized that the night scenes that it took were more real, and Huawei’s looks too fake.

According to the data given by Huawei, the Mate 20 Pro is equipped with three rear cameras, the main sensor size is 1/1.7 inches, iPhone XS Max, Note 9 are only 1/2.55 inches, ISO sensitivity has reached a record 102,400, and it can be clearly shot at night under 0.5 lumen brightness, while Apple and Samsung are less than 64,600. 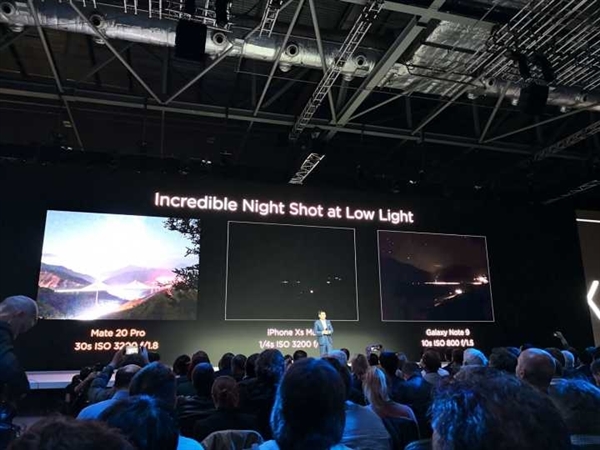 Previous Apple iPhone XR swiftly sells out in some markets