A new image circulating on Weibo reveals the possible RAM configurations of two future flagships of Samsung and Huawei. Samsung is reportedly launching two new variants of the Galaxy S10 called Galaxy S10 X and Galaxy S10 X 5G. The last device is seen in the picture with a huge 12GB of RAM. The same configuration is also seen in a variant of the Huawei P30 Pro.

According to the Weibo post, there are four new smartphones in the Samsung Galaxy S10 line. This had already been confirmed by an information leak last month. The new discovery says that the upcoming smartphones will be called Galaxy S10, Galaxy S10 Plus, Galaxy S10 X and Galaxy S10 X 5G. The Galaxy S10 phones will come with 4GB, 6GB, 8GB, and 12GB of RAM, respectively. Although there is still no confirmation on the storage. 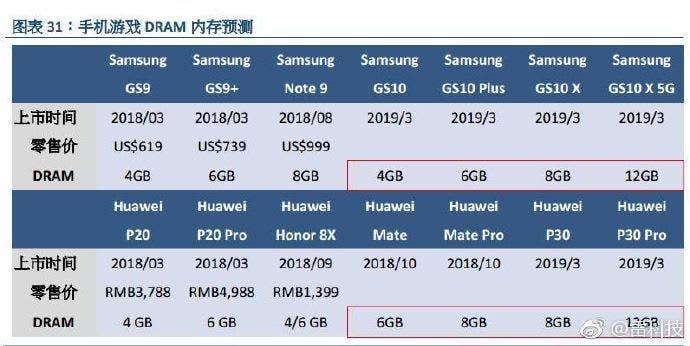 It is expected that the cheaper variant of the Galaxy S10 will come with a 5.8 inches display, while the largest will come with 6.44 inches. The Galaxy S10 will likely offer a unique camera configuration on the back in conjunction with a fingerprint scanner. The larger Galaxy S10 Plus will feature a dual camera configuration, while the Galaxy S10X models will feature a triple camera setup. According to the rumors, the larger models also offer an on-screen fingerprint sensor.

The Huawei P30 Pro is certainly a smartphone we’ll be looking forward to next year. Its predecessor, Huawei P20 Pro was quite impressive thus we expect more. The leaks so far state that the Huawei P30 will have 8GB of RAM. That’s 2 GB more than what we found in its predecessor, Huawei P20. According to this information leak, the two new Huawei phones could be launched in March next year.