Sony as a whole is forecasting a record in profit for the last quarter of 2018. But when it comes to the smartphone segment, the company keeps losing money.

For the three-month period which ended on September 30, Sony has announced that it shipped just 1.6 million smartphones. This is a huge decline of 1.8 million units over the amount achieved in the same period last year. The result also is a drop from Q2 2018. In terms of revenue, these numbers are translated into a total of $1 billion.

Despite all the cost-cutting adopted by the company in the mobile segment, it still reported a large loss of $265 million which is being associated with a decline in sales across Europe, Latin America, and the Middle East. 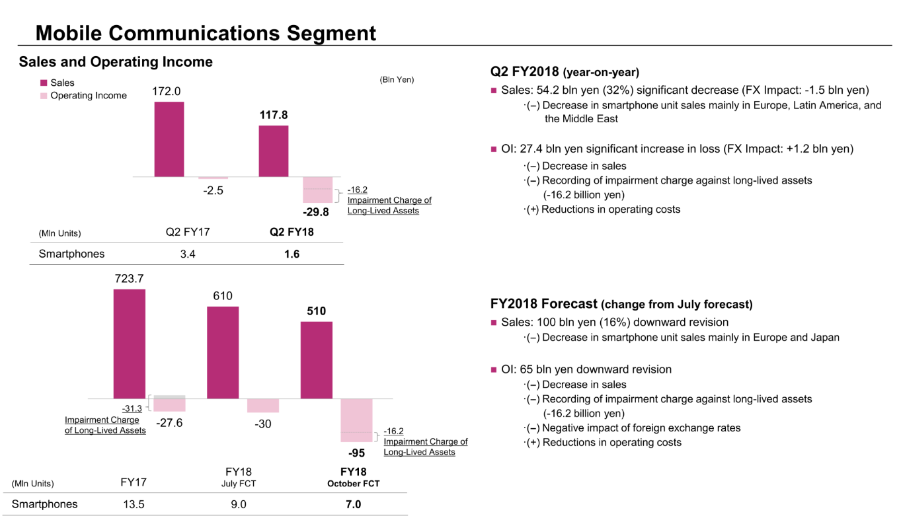 For that reason, Sony has once again revised its previous forecasts. Previously, the company was expecting smartphone shipments of 10 million units. After revising this to 9 million in June, the company decided to reduce the numbers even more after the Q3 2018 reports. Now the company expects to sell only 7 million units during the first quarter of 2019 which ends in March. Following this, the company now expects to see a loss of $841 million for its mobile segment.

The company was hoping to see an increase in its mobile segment by the end of 2019 or beginning of 2020 due to the use and marketing of 5G. But now, the Japanese firm expects to see a loss for its smartphone segment until the start of 2020. In a hope to reduce the loss, the company announced that will reduce the operating costs associated with the business by 50%.

The question which remains to be answered is, for how many time Sony will keep its faith in its smartphone segment.