The flagship OnePlus 6T hasn’t even hit the shelves, but when it finally does, and consumers get their hands on the device, they are most likely going to be greeted with a pop up for a software update. Reports say the test units of the OnePlus 6T available to reviewers are already getting an OTA update that promises some exciting new improvements.

First off, the latest update bumps the security level to that of November 2018, bumps the OxygenOS version to 9.0.4 and promises to deliver improvements mainly in the camera department by including the Studio Lighting effect when taking portrait shots and adds final touches to the Nightscape mode used for low-light photography.

The update also aims to adress some bug, bring improved new Navigation gesture, improved scrren unlock, as well as an update to the standby power consumption. The software version number, as well as the exact update size, remain unknown, however, as we stated earlier, buyers will have the update waiting for them as soon as they turn the phone on. If it doesn’t appear straight away, head to Settings, then tap Software update. 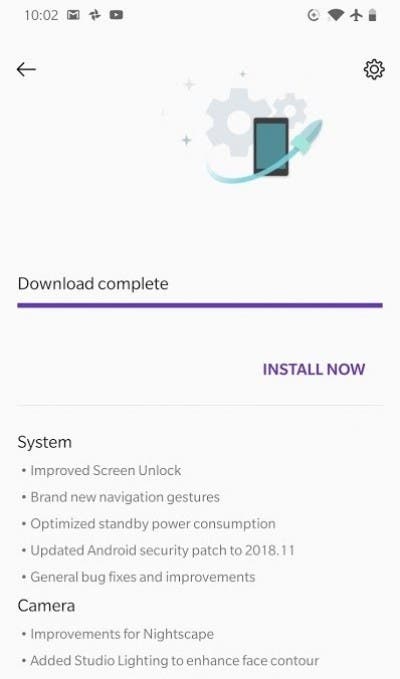 Announced a few days ago, the OnePlus 6T is the company’s first attempt at entering the US market. And while the device is billed to properly go on sale today, it appears itis heading to a good start, especially in the states, as the device reportedly attracted a larger crowd of people waiting to buy the OnePlus 6T than it did for the new iPhones.