A couple weeks back a rumor about Oppo’s sub-brand Realme using the new MediaTek Helio P70 spread online, that rumor is today confirmed by Chinese media.

According to the report, Madhav Sheth – Realme’s CEO – officially announced that the brand is going to launch new phones with the previously mentioned SoC world wide.

MediaTek’s Helio P70 uses a newer 12nm FinFET manufacturing process and is comprised of eight cores, of which four are Cortex-A73 cores at 2.1 GHz and four Cortex-A53 units at 2 GHz, plus a Mali G72 GPU. 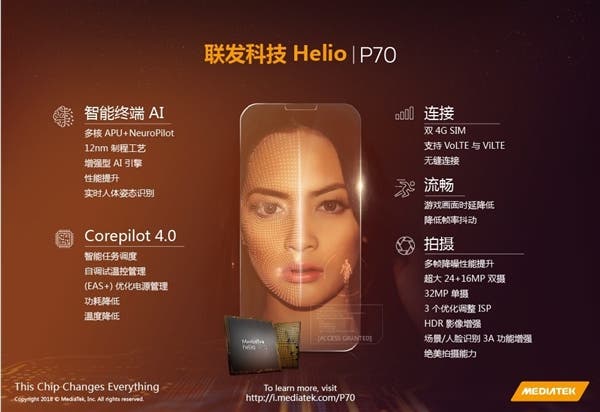 The new chipset should bring slightly better performance on the next Realme phones, along with a 10% to 30% faster AI processing and other tasks like using the voice assistant, face unlocking and more. Finally the P70 is expected to pack better camera algorithm to get better photos in Portrait Mode, Scene Recognition and Face Optimization.

Madhav Sheth also added that the phones might get Oppo’s super fast VOOC charging, but we somehow doubt the tech will be available on lower-end handsets.

Next Want a lightweight tablet ? Chuwi Hi9 Plus can be just for you then