Recently, Qualcomm announced that ‘Honor of Kings’ has been optimized for a variety of Qualcomm Snapdragon mobile platforms, and a number of smartphones equipped with Snapdragon chips have got a support for the Vulkan version of the much-popular game. Previously, we reported there are up to 12 Xiaomi phones supporting this version of the game. Now, we can take a look at the whole list. According to it, besides those 12 Xiaomi models, there are also 6 handsets with this support. They include one OPPO phone, two OnePlus phones, two VIVO phones, and one Meizu phone. 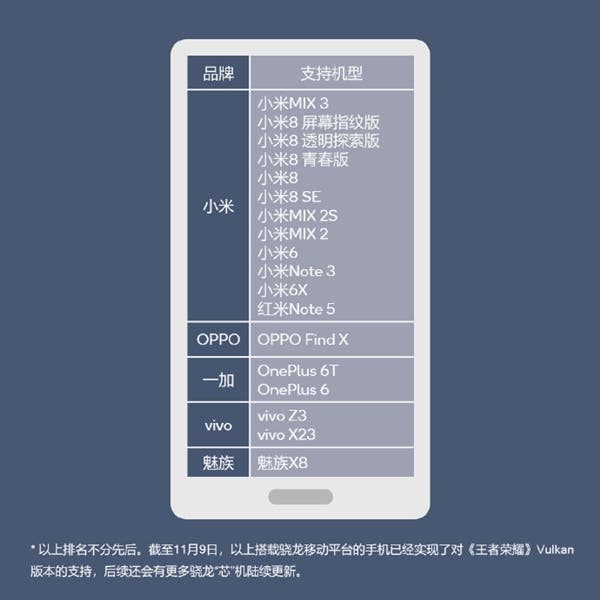 Vulkan is a new generation of graphics processing interface (API) standards introduced by the Khronos standards organization following OpenGL. Since its inception, Vulkan has taken into account the features of multi-core CPU and GPU co-processing tasks on mobile platforms. By allowing upper-layer applications and games to process multi-threaded tasks in parallel, Vulkan can release a load of CPU task scheduling to a greater extent, maximizing the performance potential of the GPU.

The Vulkan version of the Honor of Kings is based on the in-depth technical optimization of Qualcomm and Honor of Kings. Game developers and gamers can take advantage of Qualcomm Adreno GPUs on the Opteron mobile platform for more efficient graphics rendering and lower power consumption. At the same time, developers can design more expressive game graphics, and gamers can get a more stable and smooth high frame rate gaming experience.

For example, for some models, the overall CPU load of the Vulkan version of the Honor of Kings is reduced by up to 30% compared to the multi-core multi-threaded version, and the energy efficiency ratio is also great, even at high frame rate HD display effects. In the mode, a smooth full frame experience can also be achieved.

Previous VAIO A12 2-in-1 Laptop With Stabilizer Flap Announced