Earlier this November, Vivo had launched Vivo Y93 which was the company’s first smartphone to feature Qualcomm Snapdragon 439 chipset. Now the news is that Vivo is set to drop the curtains from another upcoming device – Vivo Y91i in India which will be a rebranded Vivo Y93. The news came through an online promotional poster which revealed all the device’s specs and features.

The new Vivo Y91i is believed to sport a 6.2 inches HD+ (720×1520 pixels) resolution display addressing 19:9 aspect ratio. On top of that, it features a water drop notch which encompasses the front selfie camera making a screen-to-body ratio of just 82.4%. Speaking of the camera, it boasts a dual rear camera of 13MP + 2MP at the back and at front it carries an 8 MP selfie shooter. 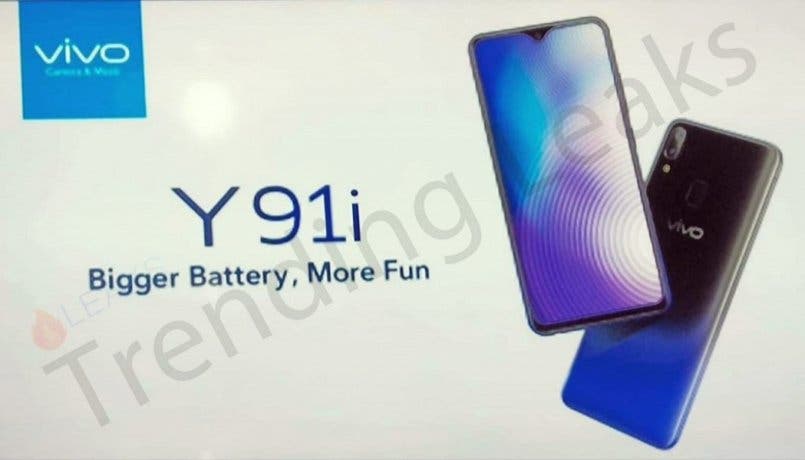 Furthermore, the upcoming phone is powered by a Qualcomm Snapdragon 439 same as Vivo Y93 and it comes preloaded with Android 8.1 Oreo with FunTouch OS. The phone is manufactured in 4 GB and 2 GB RAM variant which comes with a capacity of 64 GB and 16 GB internal memory respectively. The additional features that phone supports are a fingerprint scanner, quick charge, 4G VoLTE and a facial recognition in the front camera.

Jumping to the Vivo Y91i price tag, the 2GB variant may cost around Rs. 10,000 and the other 4GB is likely to cost around Rs 15,000 as per MySmartprice. The phone will arrive in distinct colors like Zixia Red, Ocean Blue and Starry Black as of now. However, the Vivo Y91i launch date is not yet announced by Vivo but we believe that it will be surfacing in December before the year ends.

Next OPPO to bring SuperVOOC to India, could arrive by next month