In recent times, Chinese manufacturers have shown that they have a lot more to offer than the market thinks. The huge progress of Chinese OEMs is evident in its market performance in recent times. According to Gartner, global smartphone sales for Q3 2018 increased by 1.4% year-on-year but if we exclude Huawei & Xiaomi sales (two Chinese heavyweights), the total sales of the remaining brands actually fell by 5.2%. 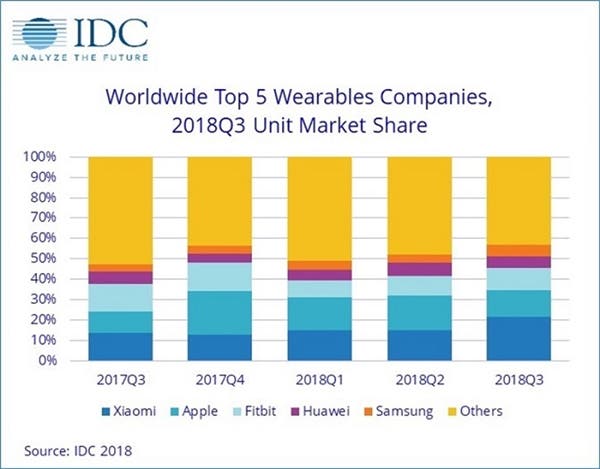 Specifically, Xiaomi’s shipments increased to 6.9 million units, mainly due to two factors: the launch of the Mi Band 3 smart band and its expansion into foreign markets. In contrast, Apple chose to launch the Apple Watch Series 4 at a higher price and refused to reduce the previous models below the $200 price mark, this greatly affected its market share.

Overall, however, Apple’s Apple Watch 3 shipped the most in the third quarter, reaching 4.2 million units. If you look at market share alone, Xiaomi is now 21.5%, while Apple is only 13.1%, but the two are taking a different path. The former relies on volume, while the latter relies mainly on profits.

Close behind are Fitbit, Huawei, and Samsung. In the third quarter, these companies smart device shipments were 3.5 million units, 1.9 million units, and 1.8 million units, respectively, with corresponding market shares of 10.9%, 5.9%, and 5.6%.

Next DxOMark Makes Changes In Its Evaluation Rules