Xiaomi Mi 6 is Xiaomi’s 2017 flagship smartphone which has quickly fallen down the pecking order due to the vigorous release of flagships by the company. Though it’s over a year on the market, Xiaomi doesn’t really abandon its smartphones. Today, the company released the MIUI 10.2.1 stable official version update with version number V10.2.1.0.OCACNFK and the download package size is 570MB. 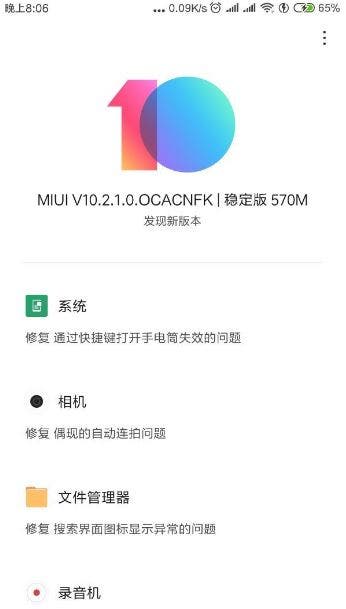 The Xiaomi Mi 6 is one of the earliest smartphones to use the Snapdragon 835 SoC which has now been dominated by the Snapdragon 845 and most recently, the SD 855. It uses a 5.15 inch with a resolution of 1920 x 1080. In the camera department, the Xiaomi Mi 6 is equipped with a dual rear camera setup. It has a 12MP + 12MP configuration on the rear and an 8MP sensor for selfies. This smartphone runs on Android Oreo and a 3350 mAh battery keeps its lights on.