According to Counterpoint research, the high-end (phones that sell for $400 and above) smartphone market is still growing, reaching 19% for Q3 2018 while the overall smartphone market declined in the quarter 5%. However, only two manufacturers dominate the high-end market, collectively claiming over 65% market share. 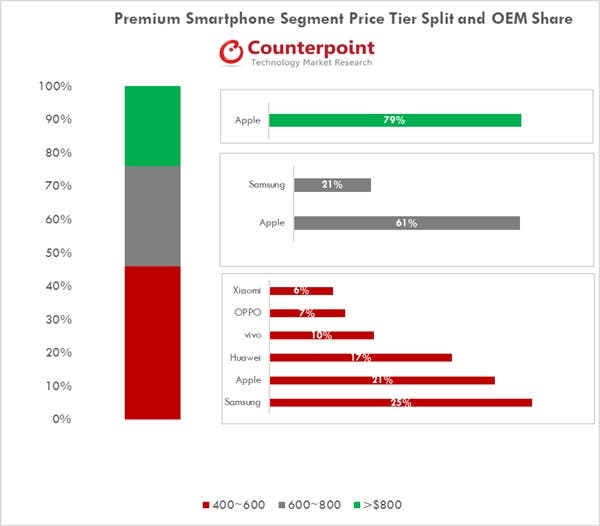 In terms of overall share, Apple has a 47% share in the high-end smartphone market, followed by Samsung with 22%. Chinese manufacturers, Huawei, claims the third position with a 12% market share while Xiaomi make-do with the sixth position with 3%. Meanwhile, this is the first time that Huawei’s achieves double-digit market share.

According to the price, in the range of $400 to $600, Samsung is top with a market share of 25 %, followed by Apple and Huawei. However, in the $600 to $800 price range, Apple and Samsung almost completely dominate. The Huawei P20 put Huawei on the map in the above $800 segment but it couldn’t do anything about Apple’s massive 79% market share in that segment.