Today, Xiaomi’s founder and CEO of Xiaomi Technology, Lei Jun, said that if anyone is worried about the specs of Redmi’s upcoming flagship smartphone, he needs not to worry anymore. Lei Jun stressed that the Redmi independent brand is not afraid of any opponents because it is ready to release good value for money and quality devices. 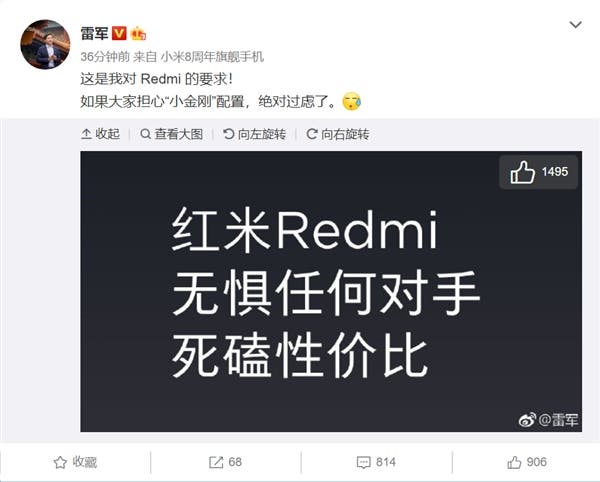 The Redmi brand, as well as its first flagship smartphone, are expected to be announced on January 10th. One aspect of this device that is still unclear is the processor. According to previously disclosed information, Redmi’s new flagship may be equipped with a Qualcomm mid-range processor. Currently, the options include Snapdragon 660, Snapdragon 670, Snapdragon 675 and Snapdragon 710. The possibility of SD636 is very low. In all honesty, smartphone enthusiasts are hoping that Redmi pulls a huge stunt and use the SD845 on this one but that is most unlikely. A flagship phone with a mid-range processor isn’t entirely convincing and it may have problems in the market except the price is too good to be true.

The Redmi upcoming flagship smartphone uses a 6.3-inch waterdrop display making it the first ever Xiaomi phone to do so. To improve its appearance and quality, Redmi used double-sided 2.5D glass and a gradient colour design for this device. In addition, Lei Jun said that the company has done a lot of work on quality improvement and assured netizens that they won’t be disappointed. The lights of this device will be kept on by a decent 3900 mAh battery.

Next Discount coupons for Microsoft software at the Lvlgo.com website