If a couple of weeks ago, some rumor said that Google Pixel 3 Lite XL could come with 6 GB of RAM on board, which is rather strange considering that on the standard Pixel 3 GB there are only 4GB, here is something new leaked that shuffles the cards on the table.

Everything comes from the passage on Geekbench you see at the bottom, a passage from which various interesting details emerge. It appearse that Google Pixel 3 Lite XL could carry a different name after all : Google Pixel 3a XL instead of Google Pixel 3 XL Lite.

The phone is running Android 9 Pie and has 4 GB of RAM which is more likely than the old rumors, also there is a SoC with an octa core CPU at 1.71 GHz from Qualcomm. 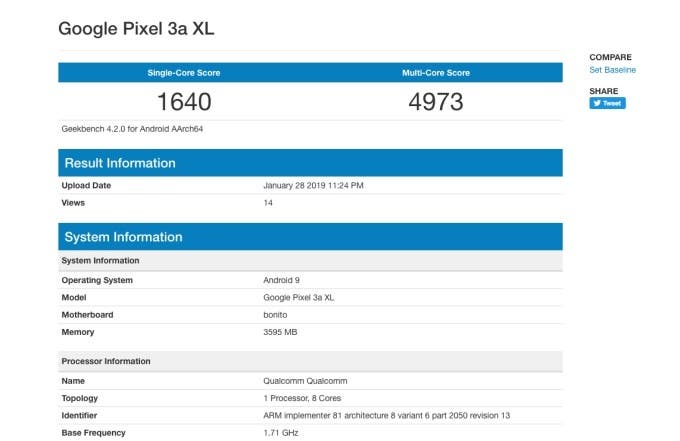 It is clear that this is not the old Qualcomm Snapdragon 845. Instead, it is legitimate to think that on board this alleged Google Pixel 3a XL, there is the Qualcomm Snapdragon 710, mid-end Mobile Platform that we have already seen on Nokia 8.1 and Samsung Galaxy A9 Pro.

This is all for the moment, but if Google Pixel 3a XL really had to arrive in the spring along with his little brother Google Pixel 3 Lite, we will know more soon.