ZTE is in a race to build its former image and establish its market position once again, after the scandal the company got involved with U.S. government, which forced the company to close its doors. Back in the last year, the Chinese company and the Uncle Sam country reached an agreement that allowed ZTE to source components and software from the United States once again.

As a good comeback, the company announced the ZTE Axon 9 Pro five months ago, and according to a new benchmark listing, ZTE is already working in a worthy successor, they may be dubbed as ZTE Axon 10 Pro. The new handset may be powerful enough to compete in a tough market currently dominated by Samsung and Huawei. 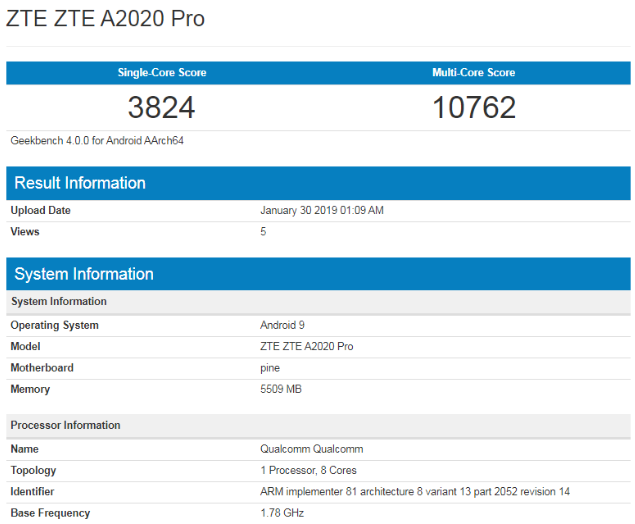 The model that landed in GeekBench realm came with the ZTE A2020 Pro model number, and since the Axon 9 Pro is the ZTE A2019G Pro it’s safe to assume that we are talking about a successor for the company’s former flagship. The new device achieved a whopping 10762 points in the multi-core score and very respectable 3824 points in the single-core tests.

The chipset in the test is described as “Pine”, but judging by the overall score, architecture, and the fact that it’s a “Qualcomm-made” chipset we can bet on the Snapdragon 855. The high-end processor is paired with 6GB of RAM and Android 9 Pie. Since the software in these “test” prototypes is likely unfinished, until the time of release we may see a slight increase in the score.

Since ZTE’s current flagships can still be considered “new” it’s hard to estimate when the company will unveil the new ZTE Axon 10 Pro. However, with the MWC 2019 nearing the shores, ZTE could take the opportunity to unveil this new flagship.