Xiaomi’s spinoff brand – Redmi recently announced the Redmi Go Android Go phone and is reportedly working on its third smartphone and the pro version of the Redmi Note 7. The device in question should launch in no distant time, and while there isn’t yet an official date, we’re getting a slow, continual pile-up of information on the device.

Although reports say the upcoming Redmi Note 7 pro is expected to feature virtually same specs as with the non-pro-Redmi Note 7, the device surely will bring along with it some basic updates that will set it apart from the base Note 7. In preparation for its release, the brands CEO Lu Weibing has taken to Weibo for users opinion on what they think are the two most important upgrades that the Redmi Note 7 Pro should bring.

The poll will be ending in about 48hrs, but already, it is obvious what users desire most in the upcoming device. About 35% of users voted in favor of a faster SoC, which somehow aligns with previous rumors that suggested the Redmi Note 7 Pro will get a more powerful SoC -likely the Snapdragon 675 which was announced back in October last year.

Closely following that are those that voted in favor of an improved 48MP camera which again aligns with rumors that say the Redmi Note 7 pro will ditch Samsungs 48MP camera sensor for Sonys 48MP IMX586 camera sensor, even though there is no current proof of differences in performance. 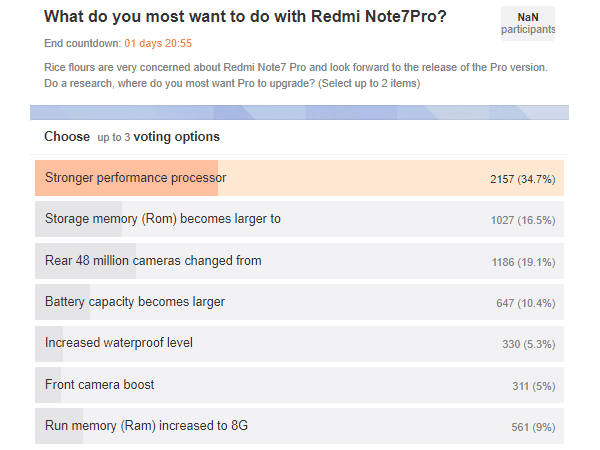 The survey is still ongoing, so there are chances the tides could change.

Previous Xiaomi Redmi Go now on pre-order in the Philippines, priced at $75

Next Upcoming Nokia TA-1157 clears TENAA ahead of February event