Samsung’s storage business is one of its most successful lineups and its products are usually ahead in the industry. The 1TB eUFS 2.1 flash memory is one of such product in which Samsung has little or no rivals. In the original 11.5×13mm size, the 16-layer stacked 512Gb V-NAND is used to create a single-grain 1TB flash memory, and a new flash control is integrated inside. It can achieve more storage space in mobile phones with very limited space. In the future, the storage space on your mobile phone may be larger than your home SSD (but not your SSD speed, unless you have a home SATA channel). It is reported that Samsung’s Galaxy S10, which will be released at the end of February, has a 1TB Emperor version. This will be the first mobile phone to be equipped with this flash memory! 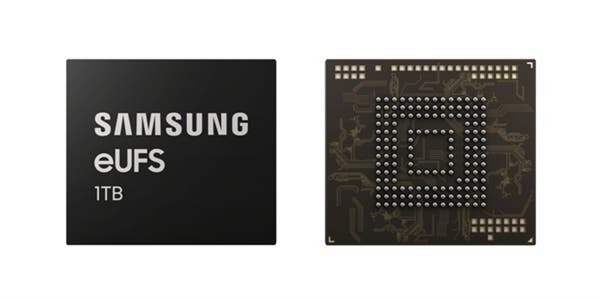 Samsung also improved the read and write performance in the 1TB eUFS 2.1 flash memory. It has a read speed of 1000MB/s, a write speed of 260MB/s, a random read speed of 58000 IOPS, and a random write of 50000 IOPS. The image below shows a comparison of Samsung flash particle parameters: 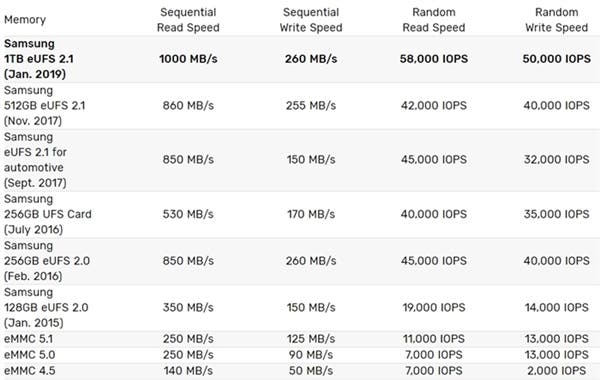 Samsung said that the mass production of its 1TB eUFS flash memory is aimed at providing a read/write performance experience closer to that of ordinary notebooks. Samsung plans to expand its fifth-generation 512Gb V-NAND capacity at the Pyeongtaek plant in South Korea in the first half of 2019 to meet the demand for this 1TB capacity eUFS 2.1 flash granule. After all, the current smartphone capacity is getting larger, and mobile phone photography has become the mainstream.

Many phone users have thousands of photos on their mobile phones, which can take up a lot of space. Videos also consume much more space. In all honesty, a 64GB smartphone now looks like the least acceptable for many smartphone users. As we crave for more advanced camera features, so also the size of a single image gets larger which means that the need for more storage space will be inevitable. The use of an external memory card is not a viable option because it has a slow transmission speed and it is not entirely safe.