The VIVO V15 pro has been hitting the rumor mills of late. The device is tipped to launch later this month, and while it has been thought it will be revealed alone, indications have now emerged that it could launch alongside the basic VIVO V15.

The device has appeared in the certification database of Thai certification agency NBTC which makes us believe that the device could launch outside of India. Unlike some other bodies, the NBTC database usually certifies smartphones with both a codename and the marketing name, and in this case, the device has the VIVO 1819 and is confirmed to arrive as the VIVO V15.

The VIVO V15 is expected to be a stripped down variant of the VIVO V15 Pro, so they are expected to share some similar features, probably with the Pop-up camera been a major difference.

Based on the earlier reports, the VIVO V15 Pro is expected to flaunt a 6.39-inch Full HD+ Ultra FullView Super AMOLED display with an in-display fingerprint sensor to match, while it will most likely get a Qualcomm Snapdragon 675 octa-core processor under the hood. There are claims that it might come with 4GB RAM, and 128GB of internal storage and that should be the only memory option, though the base VIVO V15 could get lower RAM or storage size or probably both.

On the photographic front, the VIVO V15 Pro is believed to flaunt 48MP main camera sensor in combination with an 8MP + 5MP secondary sensors, while the main talking point outside of the triple rear camera is the pop-up mechanism at the top which is expected to house a 32MP sensor for selfies. 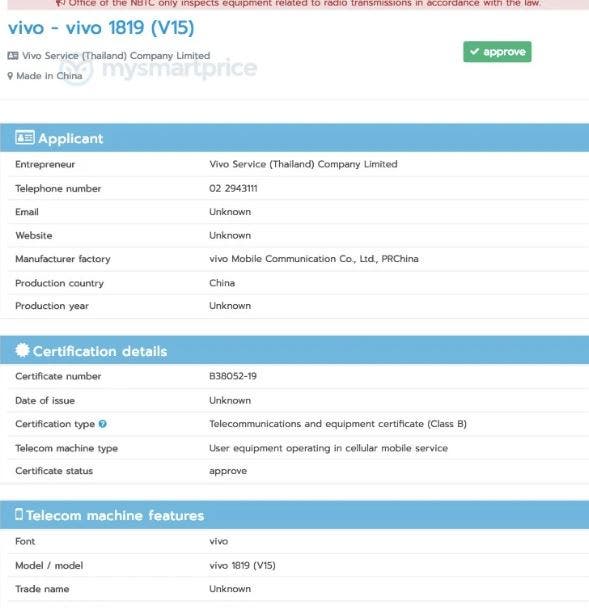 It will be powered by a 3700mAh battery with Vivo’s Dual Engine fast charging technology, boot Android 9 out of the box and should launch in India soon.

Previous More information surfaces about the ELEPHONE A6 Mini

Next Huawei Hopes Cybersecurity Should Remain as a Technical Issue