Earlier today, Chinese manufacturing giant, Xiaomi, announced its latest sales performance and the recently released Redmi Note 7 was in the spotlight. The company said that since the official sales of this smartphone commenced on January 15th, it has shipped over 1 million units. Xiaomi Group said that the first mobile phone launched by the Redmi brand has achieved such good results, reflecting the initial success of the company’s multi-brand strategy. Xiaomi will continue to provide products that pricey and too hard to refuse, the company said.

Redmi Note 7 is the first smartphone from the Redmi brand after it got its independence from Xiaomi. This smartphone comes with a 999 Yuan ($148) starting price and one of its major selling points is its 48MP camera and the Corning Gorilla Glass 5 which the company claim is almost indestructible. Before the release of the Redmi Note 7, the number of reservertaions was up to 7 million. As of now, Jingdong Mall still has over a million reservations for this smartphone. 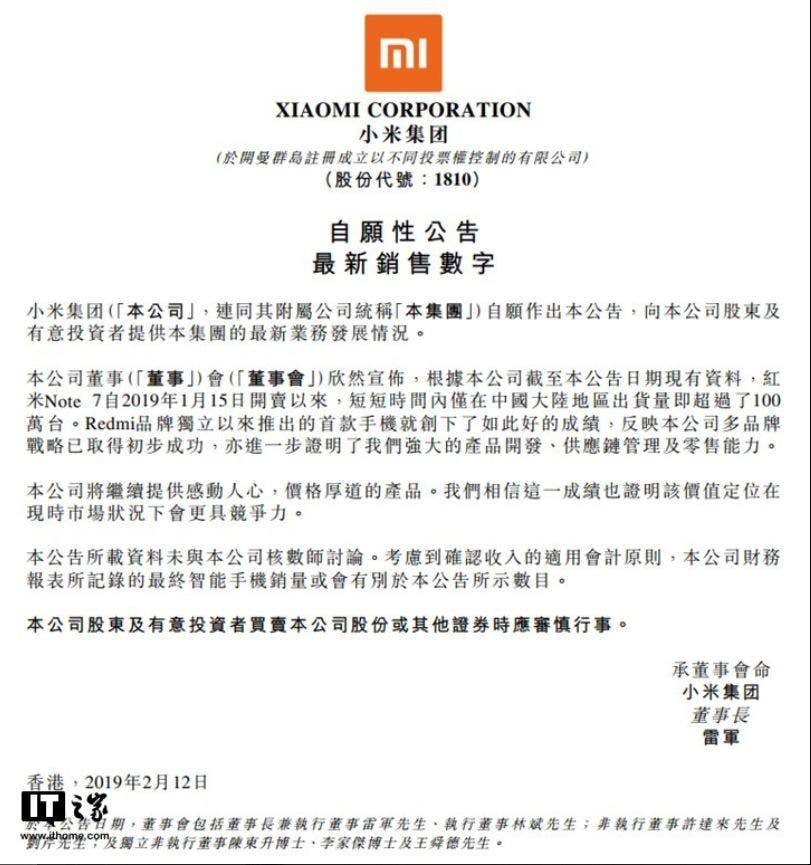 The Redmi Note 7 comes with a 48MP + 5MP dual AI camera with a unit pixel area of 0.8μm. In the core configuration, Redmi Note 7 uses a 6.3-inch 2340 × 1080 display with a Qualcomm Snapdragon 660 processor. For selfies, it has a 13MP shooter while a decent 4000 mAh battery is available to keep its lights on. In addition, the Note 7 uses the same quality standards as Xiaomi’s flagship mobile phone. According to the official introduction, after two years of improvement, Xiaomi has successfully upgraded the long-term comprehensive normal usage rate to 18 months. Thus the warranty period for the Redmi Note 7 is 18 months.

Next Samsung reaches agreement in a washing machine explosion case