Chinese manufacturing giant, Xiaomi, has accelerated its pace to release the Xiaomi Mi 9 with Snapdragon 855 SoC before Samsung which is scheduled to release the Galaxy S10 series with the same chip at the eve of MWC 2019. In December 2018, Lenovo became the first manufacturer to launch a smartphone with SD855 – Lenovo Z5 Pro SD855 version. However, only very limited units were sold and this device has since been out of stock.

Today, Lei Jun posted a message on Weibo: “On February 20th, Snapdragon 855 will premiere to the world.” Having beat Samsung by a few days, Xiaomi believes that it will be the first company with this chip. When he was asked about the Lenovo Z5 Pro SD855 version, he laughed it off and said “…Lenovo is a fake starter…a fake start is releasing a device and not having it in stock” 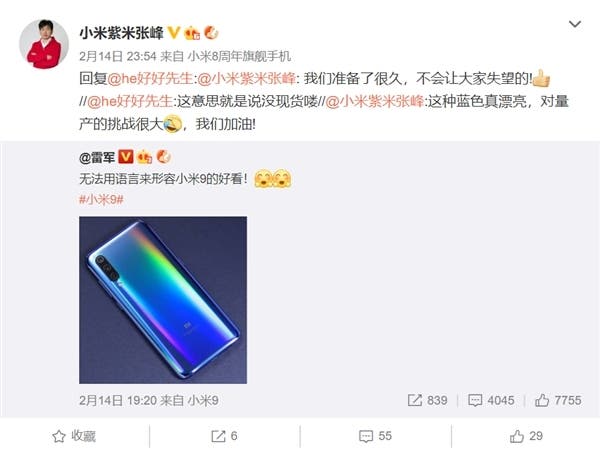 Zhang Feng, vice president of Xiaomi Group and head of Xiaomi’s supply chain, said that the blue version of the Mi 9 poses great challenges for mass production. However, Xiaomi has been preparing for a long time and will not let everyone down, suggesting that Xiaomi Mi 9 would not be short of supply. In addition to the magic blue version, the Mi 9 will also provide holographic illusion purple and black version with the same value.

Previous Xiaomi to crowdfund a new smartwatch on Feb 19

Next Wang Teng: There won't be many Snapdragon 855 smartphones for sometime