A number of alleged details and rumors about the upcoming so-called TRUE FLAGSHIP Nokia 9 PureView have made headlines recently. The leaks referenced things like the Penta-camera system, the software, the SoC a few other things. Until we are faced with the official announcement and confirmation of a majority of these features, they are and remains what they are – rumors, but there is a bit of the rumor that is now all but a given – the SoC.

The Nokia 9 (without the PureView ) has now surfaced on the Geekbench database exposing a few its expected specs. In line with previous rumbles, the Nokia 9 Geekbench listing suggests the device may not be well position to take on the like of the Galaxy S10, the LG G8, and the Huawei P20. The listing shows the device will come equipped with the Qualcomm Snapdragon 845 chipset,  6GB of RAM, will boot Android Pie out of the box, going with the FCC listing, the device will launch in some region as part of the Android One programme.

Although performance scores are on the high side, the device and its SoC are only considered good for a 2018 flagship, given that smartphones studded with the SD 855 with better performance will be flooding the market in a few days time. That notwithstanding, the device still stands a chance against the likes of the LG G8 ThinQ, Galaxy s9 and Note 9 and the Mate 20 from Huawei.

The Nokia 9 claim to fame is its five rear camera lenses, plus additional sensor and flash units amounting to seven sensors arranged in a ring format. Available renders also suggest the device has no rear fingerprint sensor, and that means it’s going to be placed under the display, something that is fast becoming mainstream even for budget smartphones. 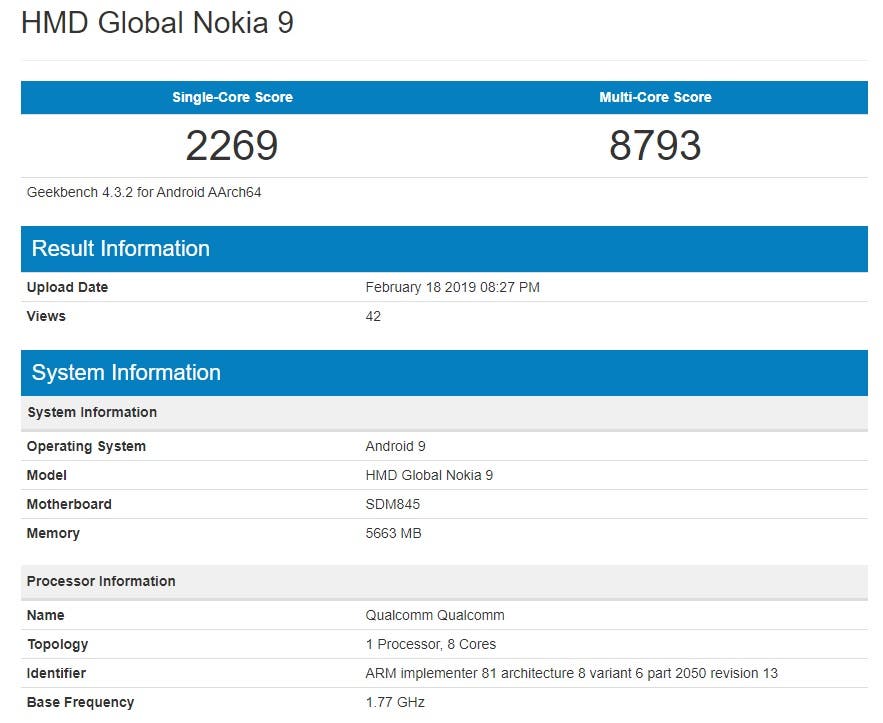 Early leaks suggest the device will pack a 5.9-inch display with an 18:9 aspect ratio, while FCC document has it that the device will feature dual-band 802.11a/b/g/n/ac Wi-Fi, Bluetooth, LTE, NFC, and support for ANT+.