Yesterday, we provided a lot of information about the Xiaomi Mi 9 Explorer Edition, which is going to be unleashed at the same event as the original Mi 9. It’s a unique combination of art and science/technology. So those who want something else rather than a regular smartphone should take a look at this amazing device. We know it will be packed with the Qualcomm’s latest flagship mobile platform, namely the Snapdragon 855. Previously, the original model has managed to leak in a couple of benchmarks such as AnTuTu and Master Lu. As for now, the Explorer Edition has appeared in GeekBench. According to the screenshot coming our way from MySmartPrice, the Xiaomi Mi 9 Transparent Edition scores 10,382 and 2,982 in the multi-core and single-core tests, respectively. 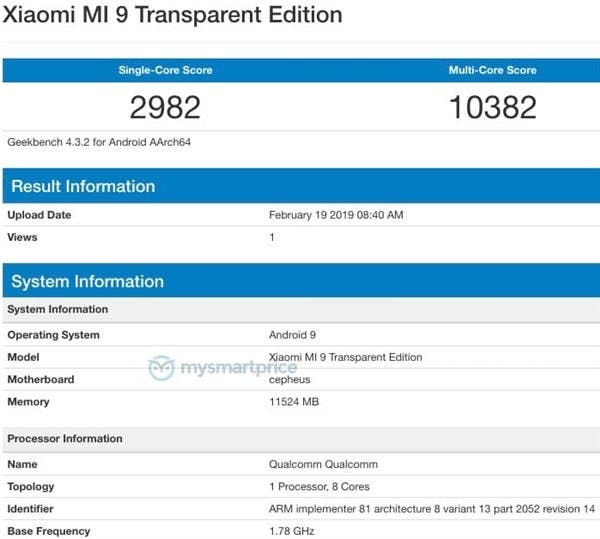 According to the official information revealed by Lei Jun and Lin Bin, the Xiaomi Mi 9 Explorer Edition will use a new sci-fi design style. What’s more interesting, under the glass, there is a space with a 0.4mm thickness only. This is the thickness of four A4 papers. In such a small space, it is necessary to create an expressive style. Also, Xiaomi used a contrasting visual difference between the material and the process on the 0.3mm ultra-thin aluminum plate. In the CNC shape on the 0.3mm aluminum sheet, the available milling cutter is only 0.2-0.3mm, just like the ‘micro-carving creation’ with the embroidery needle. That’s why everything should be done slowly to make a sense of texture and 3D. At the same time, this piece of aluminum has a heat dissipation effect.

Apart from its amazing look, the Xiaomi Mi 9 Explorer Edition is proven to come with a 48MP main camera sensor with a variable aperture of f1/1.47, a 12GB, the Samsung AMOLED display, wireless charging, and many more. But should be priced higher than its sibling. Some sources claim it will cost 4999 yuan ($740).