It is usually expected that when a new flagship smartphone arrives, the price of some pre-existing flagships will plunge. This is exactly the case of the Xiaomi Mi 8 Pro. After the first official sale of the Xiaomi Mi 9, the company has now reduced the Mi 8 Pro’s price by 500 Yuan ($75). This smartphone now has a price of 2499 yuan ($373) for the 6GB +128GB model. Lei Jun emphasized that the Xiaomi Mi 8 Pro camera software has the same quality as the Xiaomi Mi MIX 3. He said, “the super night scene and the 960-frame slow motion has a good value”. 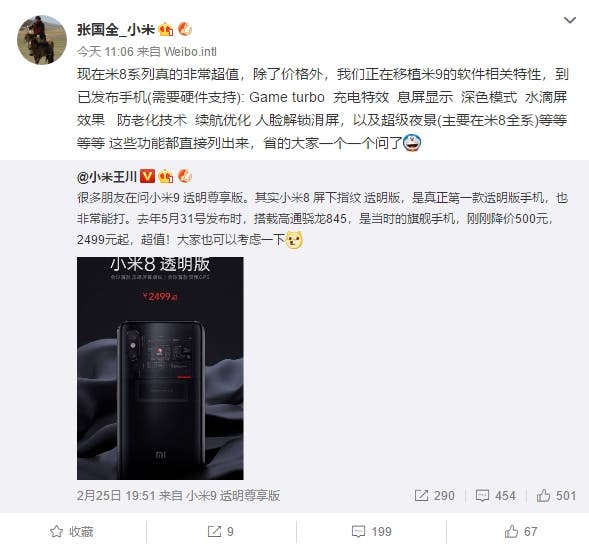 Recently, Wang Chuan, co-founder of Xiaomi Group said on Weibo: “Many friends are asking for the Xiaomi Mi 9 transparent exclusive version. In fact, the Xiaomi Mi 8 Pro is the first transparent mobile phone…it has just cut the price by 500 yuan ($75) and it is worth it!” It is understood that the Xiaomi Mi 9 transparent version will officially start sales on March 1 and the 12GB RAM + 256GB storage option will sell for 3999 yuan ($597). Xiaomi senior engineer Zhang Guoquan said that the Mi 8 series has a good value now considering the price reduction and the numerous upgrades which it has received since it was first released.