The Galaxy S10+ arrived just a few days ago and can already be considered a revolution of its own. Despite the fact that it has powerful and insane specifications and capabilities, there’s one particular thing that excited users and it doesn’t have to do with the powerful chipset, the large amount of storage or new cameras. Ever since Samsung introduced the Bixby button, people have been requesting for a possibility of changing the button behavior, Samsung always denied since it would ultimately negate all the “benefits” of its smart assistant.

However, this changed with the release of the Galaxy S10 line when Samsung promised to finally allow users to remap the function of the physical Bixby button. Apparently, this was a last minute decision, since the function wasn’t available on the software the Galaxy S10+ came with. That’s not a problem at all since buyers of the handset will get it only towards March 8 and the update is being rolled out for devices right now. 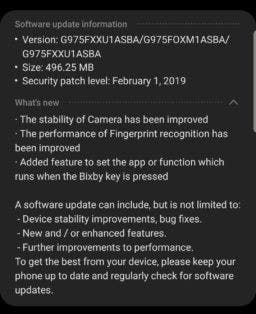 According to SamMobile, some devices are already getting the new update the allow users to change the behavior of Bixby button, but the update also adds some internal changes to improve the stability of the Camera and the performance of the Fingerprint Scanner has been further improved. Along with this, there are a ton of performance updates and bugfixes. The small 500MB patch has come pretty fast, but that’s not a surprise since Samsung wants users to have the best possible first impression when they get the new flagship.

Previous statements from Bixby remapping function points out that users will be able to customize either the single press or the double press of the button, the other will remain dedicated to launching Samsung’s virtual assistant.  Currently, there is no information if the update will come preinstalled in the brand new Galaxy S10+ that are shipping in the new week, but either way, users will have it available as soon as they power up the fancy smartphone.

According to the South Korean Behemoth, older devices will get some love as well, and the feature is planned for them in a future update.

Previous Lenovo hits back at Xiaomi - Questions the Mi 9 availability