Today, the vivo sub-brand, iQOO, held a new product launch conference where it released the expected iQOO flagship smartphone. In addition to the three standard editions, it also released an iQOO Monster Edition with Snapdragon 855 and 12GB of RAM. On AnTuTu, this smartphone exceeds 400,000 points, and it comes with a 2998 Yuan ($447) starting price. 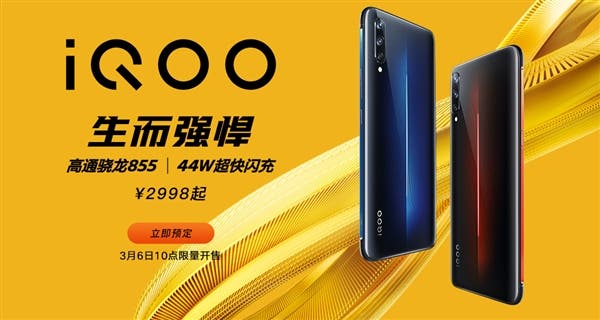 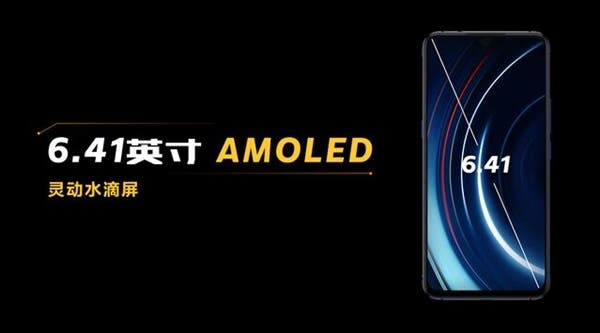 The rear cover is designed with a dark night light which produces different light reflection when viewed from different angles. The back cover has two stunning electric light patterns and hides a colourful LED light strip. It is cool and smart when illuminated and it gives rapid visual pleasure. 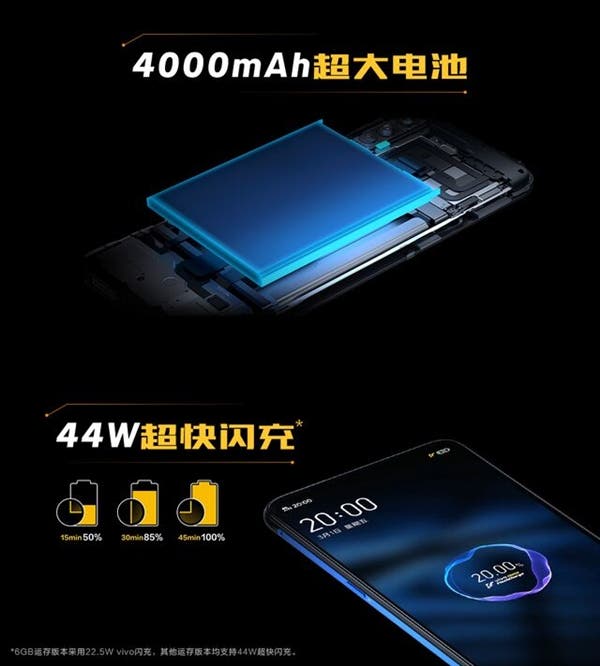 In the core configuration, the iQOO mobile phone is equipped with a Qualcomm Snapdragon 855 flagship platform coupled with 6GB/8GB/12GB of RAM and 128GB/256GB of internal storage. Its lights are kept on by a 4000 mAh battery which it supports 44a W super fast charge. According to the company, this smartphone can be charged to 50% in 15 minutes, 85% in 30 minutes, and full in 45 minutes! 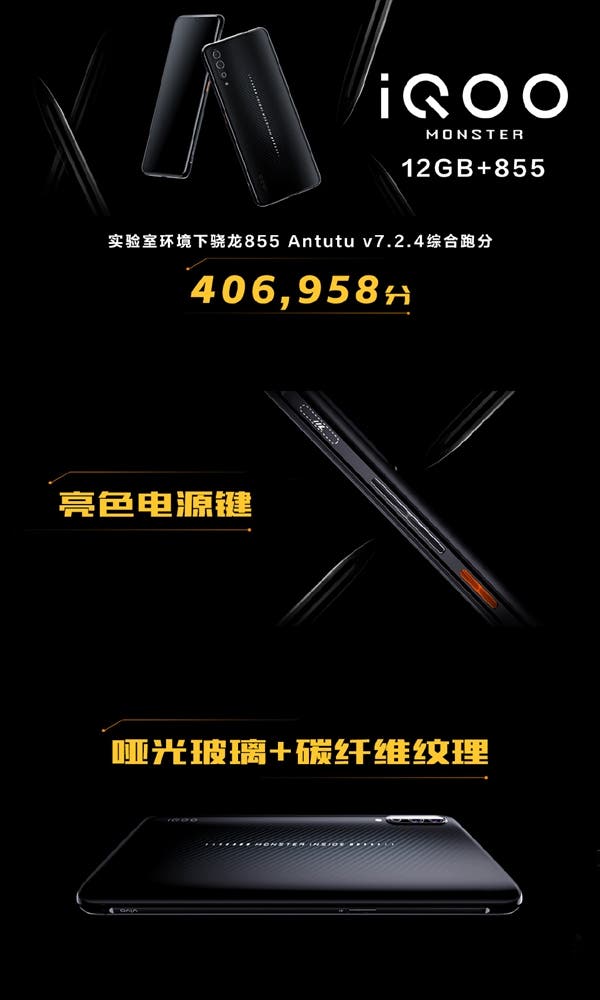 At the same time, iQOO is equipped with a new “super liquid cooling”, which utilizes the principle of liquid high-temperature evaporation, heat absorption, low-temperature liquefaction and heat release for an efficient heat transfer and its thermal conductivity is up to 10,000.

More importantly, iQOO is equipped with a Multi-Turbo feature, including AI Turbo, Center Turbo, Net Turbo, Cooling Turbo and Game Turbo. AI Turbo increases the startup speed of popular apps by 30% while Center Turbo has improved the frame rate by 73%. As for Game Turbo, it opens a key performance experience interface between mobile phones and game engines while Net Turbo becomes active when the Wi-Fi signal is not good – it automatically switches the player to 4G network. 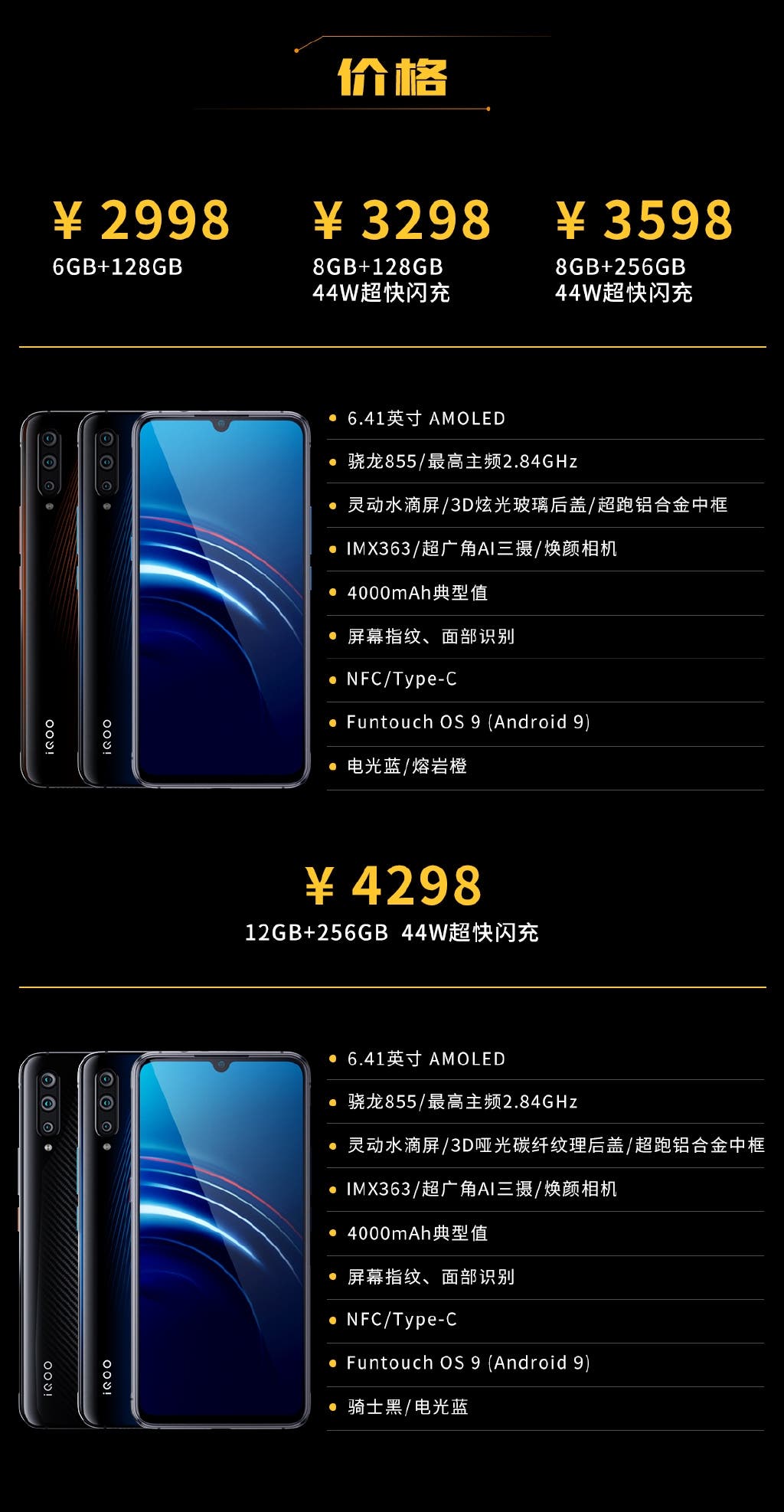 In the photo performance, the iQOO rear-mounted Sony IMX363 sensor and a120-degree ultra-wide-angle lens can accurately identify the camera scene and quickly match the corresponding camera mode. At the same time, the super night scene is added, and the photos with rich details and low noise can be easily obtained in the handheld state. In a low-light environment, iQOO can cover a dynamic range of up to 12.3 EV, making it easy to take good pictures with rich shades and natural transitions. In addition, iQOO is equipped with full-featured NFC, USB Type-C interface, and Funtouch OS 9 (Android 9.0).

As for the price, iQOO has four versions which are priced as follows

The first three models commence sales today but the whole series will be available from March 6th.