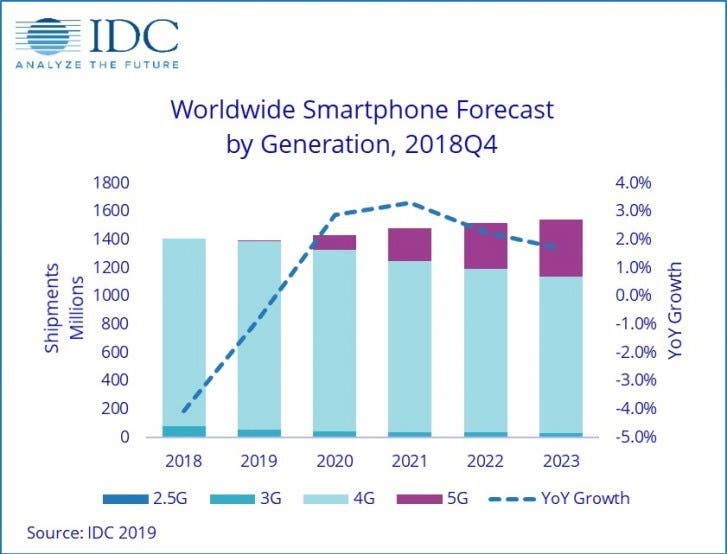 IDC said that in the short term, the 4G smartphone shipments will not change very drastically. The market share of 4G smartphones will still be 95.4% this year, and its shipments are expected to reach 1.542 billion units in 4 years, accounting for 71.4% of the total market share.

IDC senior analyst Sangeetika Srivastava said: ‘Though the 5G developments and foldable screen buzz is yet to have a reality check from users, 2019 will be surely marked as a year of modernization in the smartphone market.’ IDC currently expects 5G smartphone shipments to account for roughly 1 out of every 4 smartphones shipped globally in 2023.

It is worth pointing out that IDC’s forecast is based on the currently available information, and the actual situation in the future market is likely to change dramatically. IDC believes that sales of smartphones will see a third consecutive year of decline in 2019, in part due to the current political situation, the slowdown in China’s market growth and the extension of the user equipment upgrade cycle. However, if the trade war between the United States and China can be properly resolved, the price of the equipment can be reduced after the tariff is lowered, and the shipment of smartphones is likely to change. Similarly, lower equipment prices or better network coverage will further increase sales of 5G devices, allowing 5G handsets to achieve faster adoption than the agency expects.