Officially, Android Q will not be introduced until May 7 at Google I/O conference. In fact and as every year, the future update of the operating system has the right to a first beta several months before its official announcement.

On Google developer website, Android Q Beta 1 is already available for the owners of Pixel smartphones. A beta 2 is already announced for early April, as well as a more complete beta 3 after the I/O. Google has released its official release schedule.

Some Pixel owners has already installed Android Q beta 1 on their devices and we have now an overview of what’s new. Good news, there is already quite a lot! 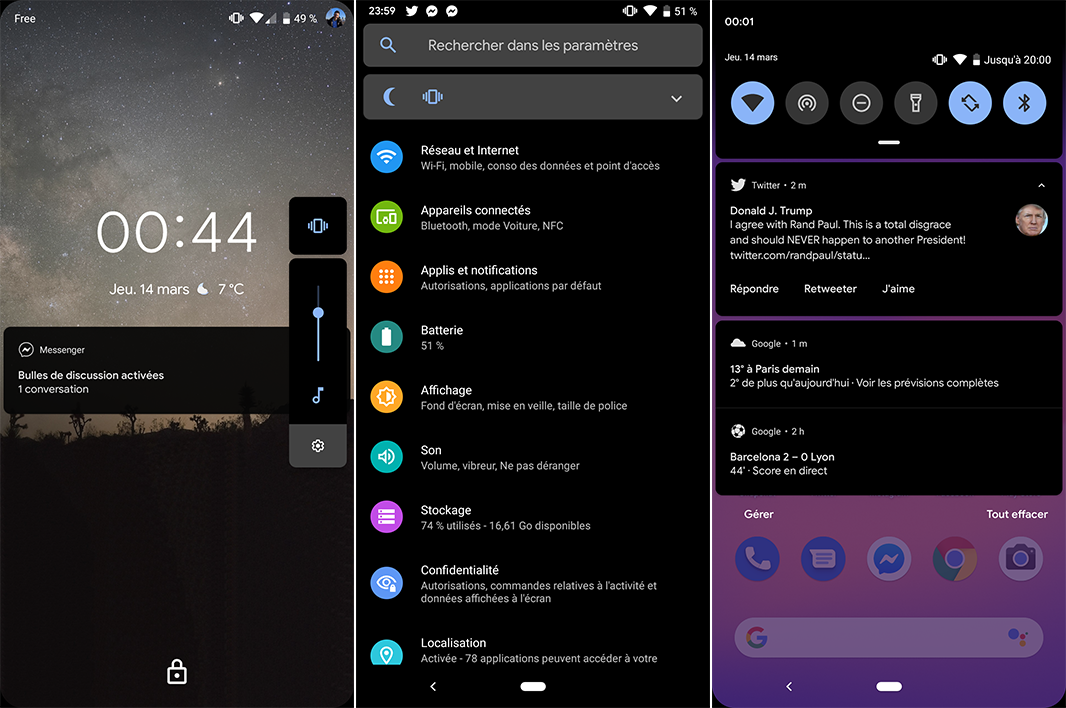 Rumors were right, Android is going to get a Dark Mode. By displaying pure black in the background of applications, OLED smartphones will use less energy and less eye fatigue. This feature has often been claimed by users, who particularly appreciate this theme in third-party applications like Messenger and YouTube.

Currently, you can not turn on or off the dark theme from the settings. Little trick though, if you had activated the dark theme of the Pixel Launcher under Pie, the dark mode will be active the first start of your pixel under Q. Impossible to disable it for now. 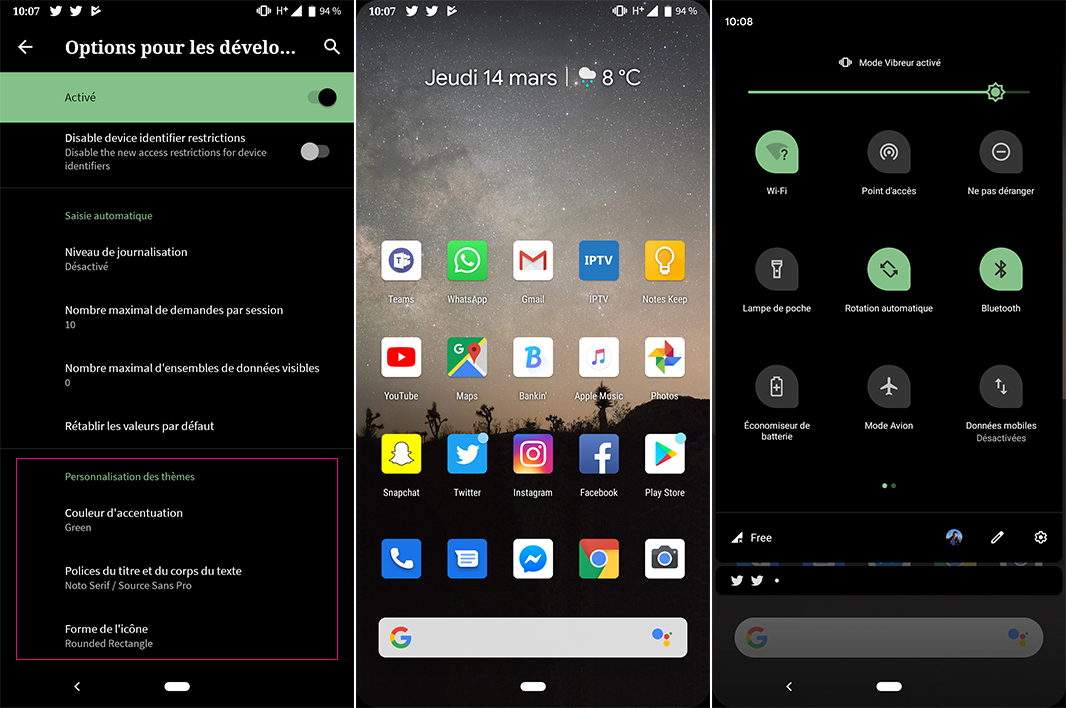 In the developer options we find at the bottom the sub-menu Customizing themes. You can choose a different system font, change the shape of the icons and select a new accent color. The possibilities are still very limited in this beta 1, but it is very promising. 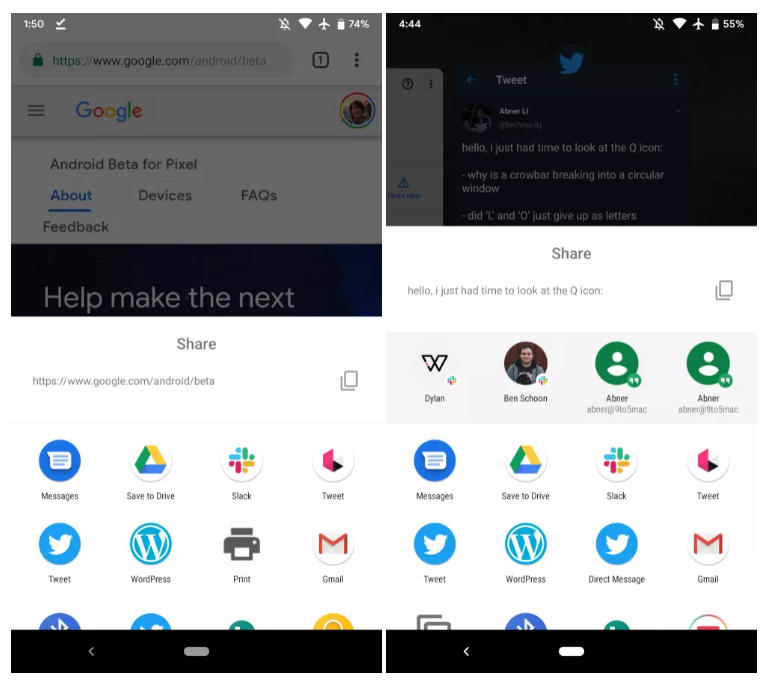 When sharing a link, image or something from an Android smartphone, you have to click on the Sharing button. This reveals a window filled with icons, corresponding to the installed applications.

New in Q, Google has tweaked the pane by centering “Share” at the top and allowing direct sharing. For example, when users open the system Share menu in Chrome, the URL is already noted with a convenient copy shortcut. It also works with copied text from any Share menu. 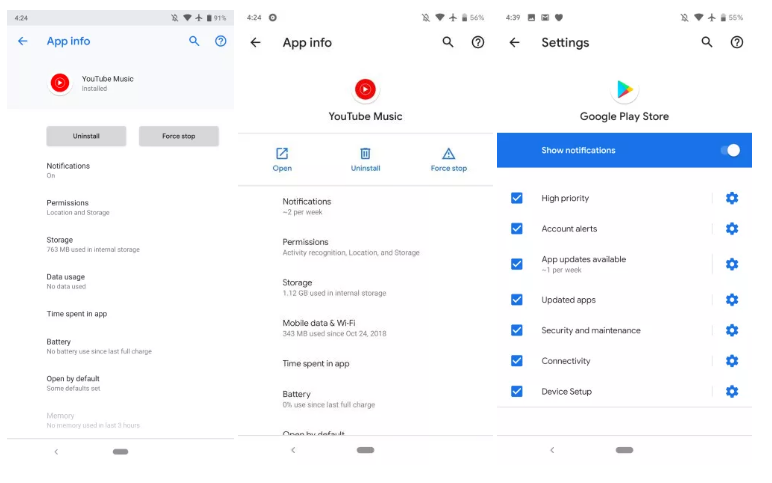 How to prevent an app from monitoring your location permanently? As on iOS, Android Q will limit the location to applications in use. If you close Uber or Facebook, it will be impossible for it to continue tracking you down.

When opening an application for the first time, we also notice that Q shows more clearly the different authorizations requested. The messages are similar to those of iOS.

Besides, page of an application is simplified in Q. It is easier to navigate in the sub-menus.

Video recording of the screen 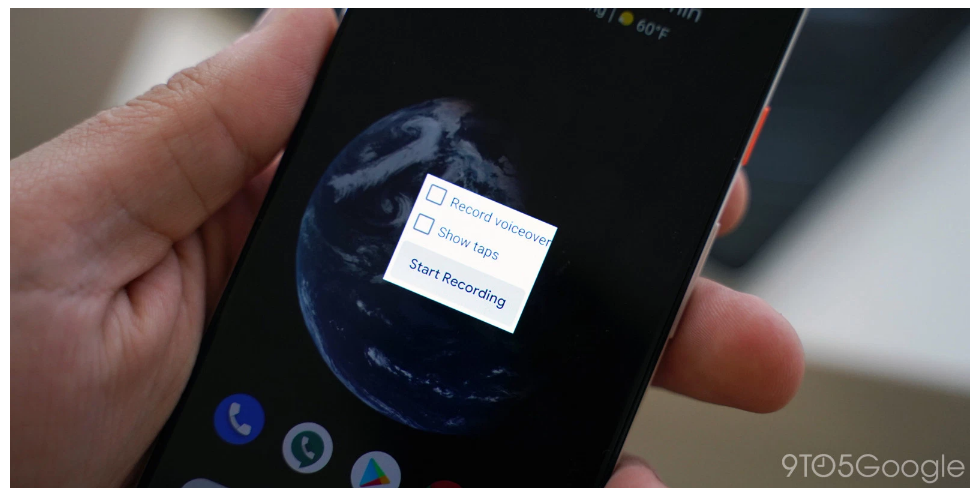 This feature is clearly not yet ready, but Android Q Beta 1 contains a built-in video screen recorder. How it works ? We keep pressing the unlock button and a pop-up proposes to start the recording will show up. Once you’re done, click Stop in the notification center and the video lands in the Google Photos Captures folder.

A gesture from the iPhone X

To quickly return to the previous application, Android Q borrows from the iPhone X one of his best gestures. By sliding your finger to the right while holding it on the home button, we return to the last application used. It’s not finalized yet, but it’s auspicious. 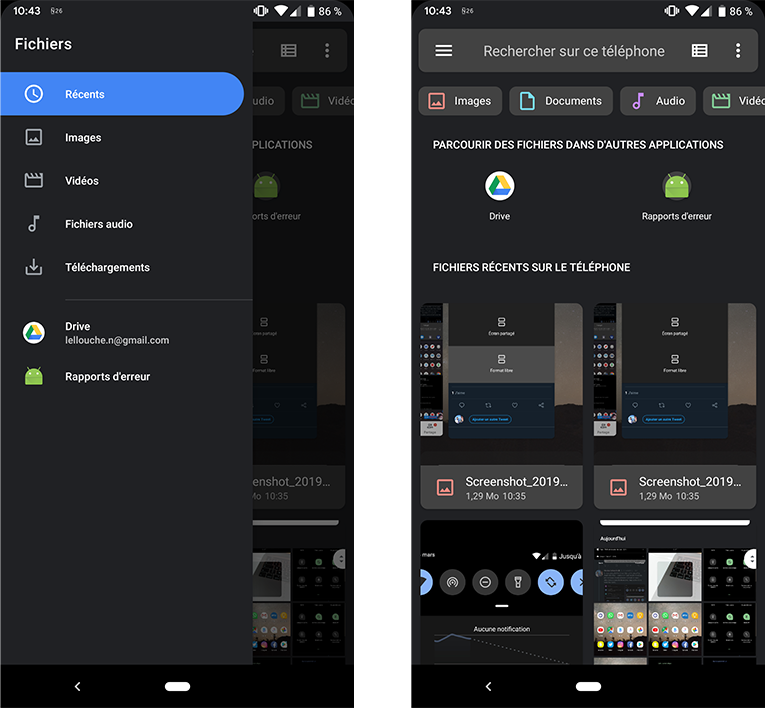 More an aesthetic change than a revolution, the Android Files application gets Material Design. It’s more in sync with the rest of Android and quite pleasant. 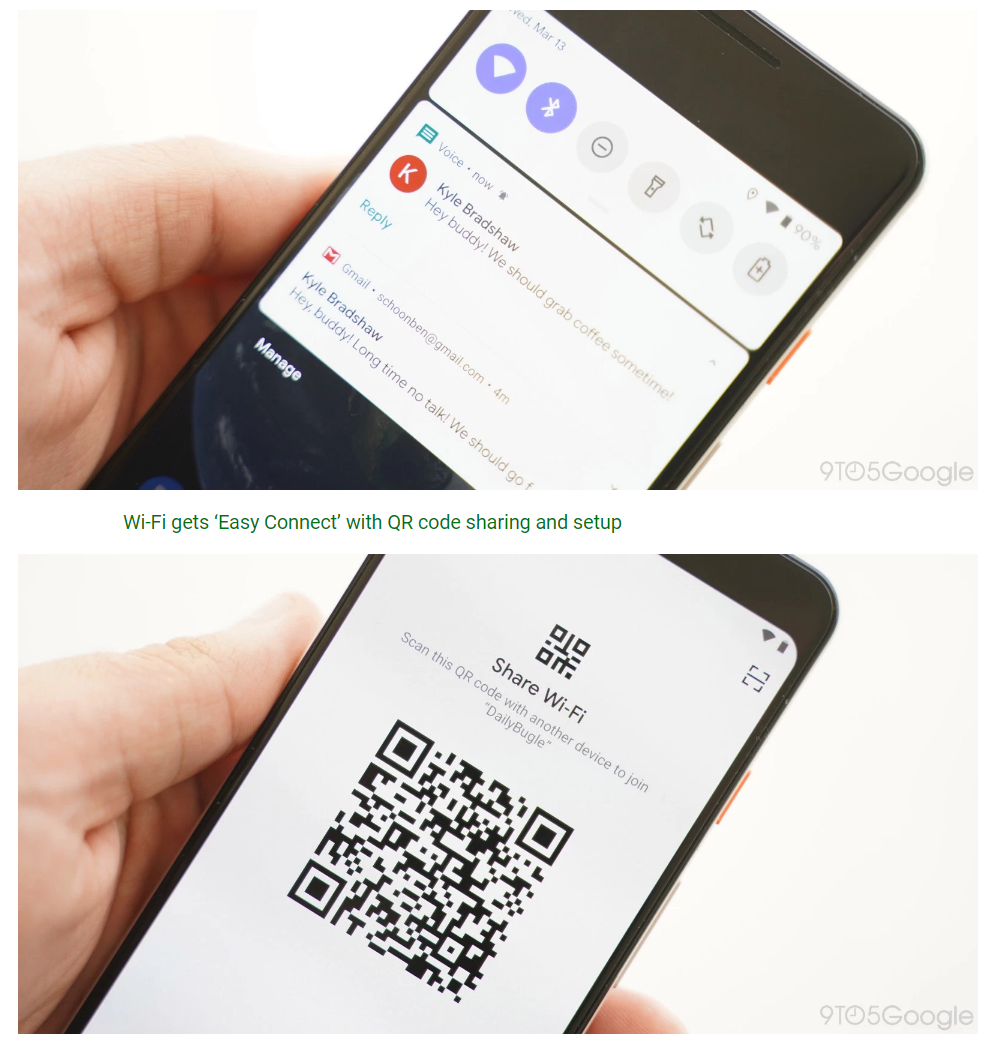 Fed up with the question “what’s your Wi-Fi code”! To answer this problem, Q proposes in its settings to create a QR Code corresponding to your home connection. Other users have to scan it to be immediately connected. When we connect to a new Wi-Fi, we also have the option “scan password”. The smartphone then searches for a QR Code.

Can not try it yet, but the Android Q developer settings mention a “desktop” mode. Similar to Samsung’s DeX or Huawei’s PC mode, it should allow when connecting the smartphone to a screen using an HDMI cable to replicate the interface of a computer with support of using a mouse and keyboard. 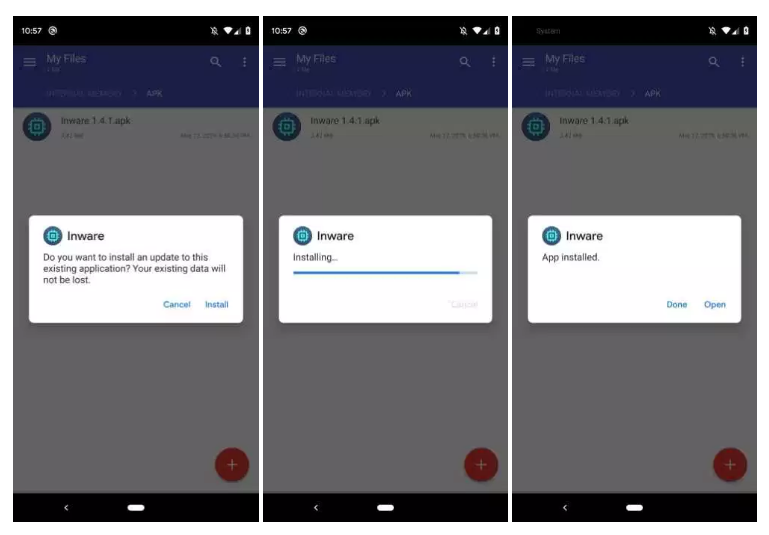 One of the advantages of Android over iOS (or disadvantage, it depends) is the ability to install applications from any source. Until then, opening an APK file launch a full-screen installer. With Android Q, there will only be a small loading bar in the middle of the screen. Again, Google simplifies Android.

In the notification center, the font used for time is different. Moreover, instead of displaying the percentage of remaining battery, we now have an estimate of the time remaining before extinguishing the device.

When the phone is idle and Always on Display is on, the battery percentage is also shown. The song being played is also displayed under the time. Impossible to know if this novelty will be reserved for pixels phones or not.

Another amazing novelty, screenshots now show the notches. No more perfectly rectangular images, we now have a PNG that reveals rounded corners and hidden areas. We are curious to know if the punches will also be masked. (It’s not impossible that this feature will remain exclusive to Android Q’s betas, and the final version will restore the traditional display, perhaps just to make life easier for developers).

Small change in notifications: we can not eliminate them by swipping them to the left of the screen. This gesture only displays the options to mute or create a reminder. To delete a notification, you must drag it to the right.

For a first beta version, Android Q reveals a lot. Other functions are also impossible to try such as compatibility with folding screens. We can not wait to see what Google is getting ready for its I / O conference, which will start on May 7th.

Next Facebook Loses Top Executives and prepares for a unified platform