On March 18th, Redmi will hold a spring new product launch in Beijing, which is the second press conference after the brand’s independence. Redmi officials have confirmed that the Redmi Note 7 Pro, Redmi 7 and other non-smartphone products will be released in this conference. Today, Xiaomi Mall announced that pre-sale of the Note 7 Pro has commenced and potential buyers need to pay 100 Yuan ($15) in advance. 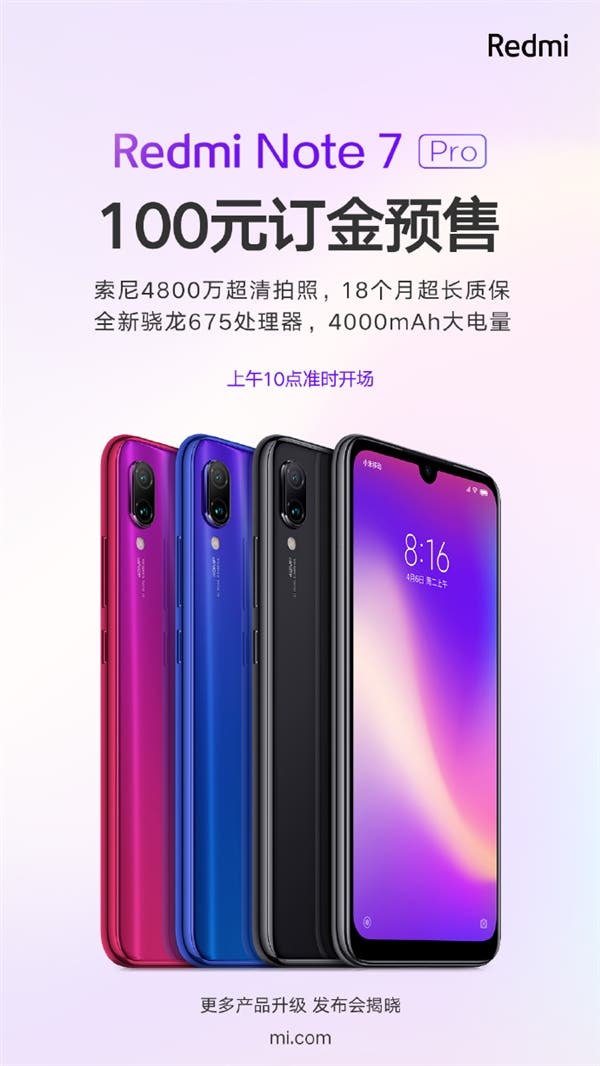 This smartphone was first released in India on February 28th. Lu Weibing, general manager of Redmi brand, said that in order to wait for Redmi 7, the Redmi Note 7 Pro conference will be slightly pushed back. Another advantage of this push is that both smartphones will have more stockings. Recall that Xiaomi has faced a severe shortage of the Xiaomi Mi 9 series and even the Redmi Note 7 which was released in January this year still has some stocking challenges.

Compared with Redmi Note 7, the biggest upgrade of the Note 7 Pro is the camera, and the second is the processor. It is equipped with a Sony IMX586 48MP ultra-clear camera which is currently the highest pixel Sony mobile phone camera sensor. The 48-megapixel automatic four-in-one 1.6μm high-pixel high-sensitivity mode with single-pixel sensing allows you to capture more light even in dark environments.

Lu Weibing, vice president of Xiaomi Group and general manager of the Redmi brand, stressed that the Note 7 Pro imaging effect is worth looking forward to. Another upgrade is the processor, this device is equipped with a Qualcomm Snapdragon 675 mobile platform. This chip is based on 11nm process technology which is Qualcomm’s first fourth-generation Kryo 460 architecture. It uses an Adreno 612 GPU, the CPU clocks at 2.0GHz and it runs up to 180,000 on AnTuTu. The SoC is supported with 6GB of RAM and 128GB of internal storage. In addition, a 4000 mAh battery ensures that the lights of this smartphone remain on. The Redmi Note 7 Pro and Redmi 7 comes with an 18-months warranty and the former supports P2i waterproofing.