Today, Ni Fei, general manager of Nubia Smartphone, announced the partial configuration of the upcoming Nubia Red Magic 3. He listed six major upgrades that users should expect from this smartphone. They include 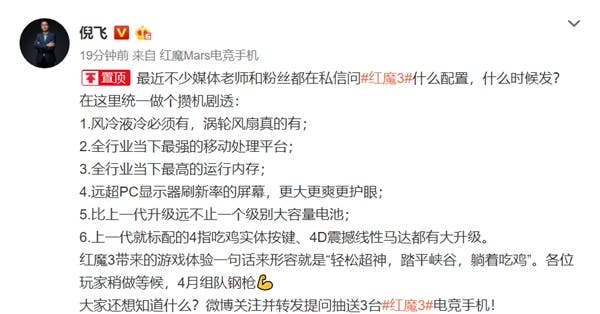 This smartphone will come with a Qualcomm Snapdragon 855 SoC. This chip is not entirely new to the smartphone market but it is still the best option for Android users for now. In addition, it also uses the highest ever RAM capacity in the industry – 12GB. The company also boasts that the display refresh rate is “far beyond” that of many PC’s.

Ni Fei emphasized that the gaming experience brought by the Red Magic 3 is “easy and seamless – the players will wait a little and get teamed up in April. This suggests that this gaming phone will be officially released in April. In addition, Ni Fei also said that the Nubian Red Magic 3 Nubia developed a composite “air-cooled × liquid-cooled” cooling module for this smartphone. This makes the smartphone to achieve an unprecedented low-temperature level.