Nokia will be announcing a mysterious new smartphone called the Nokia X71 on  April 2 in Taiwan, said reports coming out from the country today. HMD Global has sent out invites for the event of the handset which will launch alongside the Nokia 9 PureView next month. Now, the naming scheme of the handset is quite new and that’s why we’re not sure what to expect from the Finnish smartphone maker in a week’s time. 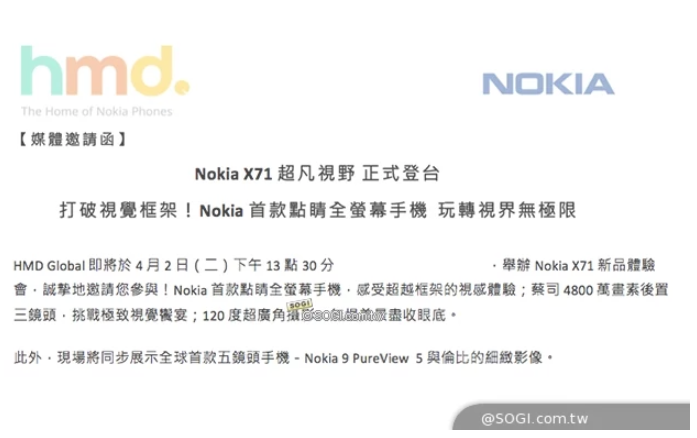 It is worth noting that the company did not unveil any premium mid-range device at MWC 2019 as it was expected to and instead launched handsets such as the Nokia 3.2, Nokia 4.2 and Nokia 1 Plus. Hence it is presumed that the Nokia X71 is a successor of the Nokia 6.1 Plus or Nokia 8.1.

Also, the press release reveals a particular tidbit about the main camera and that’s a 48-megapixel primary sensor along with a 120-degree super wide-angle lens which makes things interesting. Prior to MWC 2019, there was a leak of the Nokia 8.1 Plus which hinted at a hole-punch design. It’s possible that the Nokia X71 is actually that device.  Either way, there’s just a week left before the unveil event and we expect to see some official information regarding the new device soon.