In recent months, Google’s Android TV platform was growing incredibly fast. Even if it is a growth that concerns the partners of the Mountain View giant rather than the number of users who have actually decided to adopt this ecosystem.

On the occasion of the Connected TV World Summit in London, Google presented some data on the dynamics of Android TV, including some information on consumer-facing partners, such as Sony, Philips, Hisense, TCL, Skyworth. 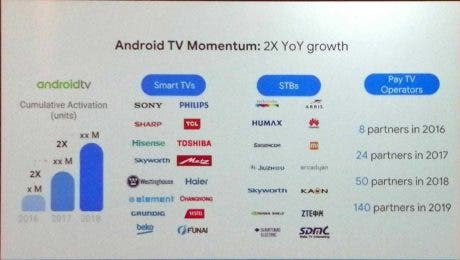 Well, the impressive data comes from Android TV partners: in 2016 there were only 8 of them decided to focus on this platform, in 2019 they reached 140 (the growth accelerated especially in the last year, as between 2018 and 2019 were 90 partners joined).

Also, the active units of devices based on this platform have increased considerably, doubling every year from 2016 to the present.

Google has explained that it is pushing a lot on the increase of operators who decide to support Android TV as its most important products (such as Play Store, YouTube or Google Assistant) are integral parts of this operating system.